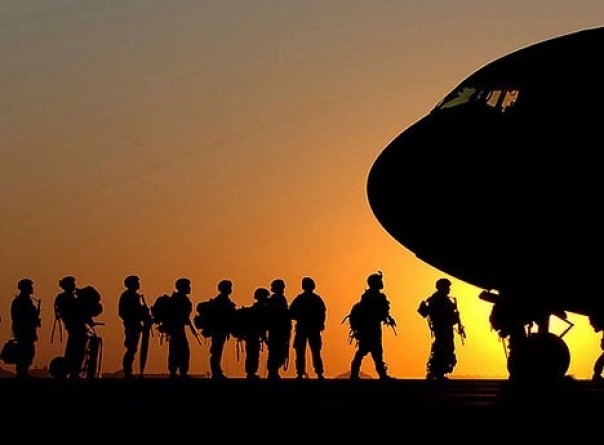 US Deploys military aircrafts across MENA

The United States has reportedly deployed a dozen aircraft in the Middle East-North Africa region probably as a precaution, in case conflicts there necessitate quick action.

According to Stratfor, a news outlet specialized in geopolitical analysis and intelligence news, at least a dozen military transport planes and gunships, typically used for a variety of special tasks, arrived mid-September in the Greek island of Crete, in all probability in a stop over on their way to another undisclosed location.

Some ten days later, 12 U.S. Marine Corps F/A-18 Hornet fighter jets arrived in two waves at Moron air base in Spain. The final destination of the squadron was not disclosed, but according to Stratfor, it might have been heading to Afghanistan to reinforce elements there and to the Gulf Cooperation Council region. A number of air superiority squadrons, including an F-22 Raptor squadron, have already deployed to the region, Stratfor said.
US aircraft deployments in the Gulf States are usually kept secret because of the Gulf nations’ sensitivities about inviting the Americans on their soil.

Quoting Italian journalist Guido Olimpio, Stratfor reported that in September, U.S. unmanned aerial vehicles were tracking militants in eastern Libya and that U.S. special operations forces were planning to carry out intelligence operations that could be in preparation for surgical strikes in North Africa, including in Libya and in Mali.
U.S. Secretary of State Hillary Clinton and other US officials said last month that al-Qaida-affiliated terrorists may have been part of the attack on the U.S. consulate in the Libyan city of Benghazi that killed the U.S. ambassador and three other embassy staff members.

“Secretary Clinton had told a U.N.-organized meeting on instability in the Sahel that al-Qaida in the Islamic Maghreb and other terrorist groups are using instability in Africa’s Sahel region to expand their operations and that the United States is stepping up counterterrorism efforts across the region.”

““We are expanding our counterterrorism partnerships to help countries meet their own growing threats.  We’re taking aim at the support structure of al-Qaida and its affiliates – closing safe havens, cutting off finances, countering their ideology and denying them recruits,” she said.

French daily “Le Figaro” on its part reported on September 24 that some 100 French special operations troops had been deployed in the sub-Saharan region to counteract militants in northern Mali. Le Figaro also reported that maritime patrol aircraft that can be used to collect intelligence will be deployed to the region and that commandos of the French navy will reinforce the French special operations troops.

Stratfor’s analysts believe that given the conflicts in North Africa, Syria and Afghanistan, as well as the current tensions with Iran, these operations may mean that the United States and France are simply positioning military assets in the region, in case conflicts there may eventually require rapid military intervention or action.
In another development, the New York Times reported recently that the United States and Iraq were negotiating an agreement that “could result in the return of small units of American soldiers to Iraq on training missions” and that “a unit of Army Special Operations soldiers was recently deployed to Iraq to advise on counterterrorism and help with intelligence.”

According to the daily, Iraq is still facing a potent insurgency while Al Qaeda-affiliated units are thriving in several Iraqi provinces and are recruiting fighters for Syria.
It has also been reported last week that the U.S. military had sent the first batch of a sophisticated new aircraft to an air base on Okinawa, Japan, where more than 15,000 Marines are stationed.

The arrival of the first six of the MV-22 Osprey aircraft at Marine Corps Air Station Futenma was confirmed by the Japanese Defense Ministry which said another six aircrafts were due in the base later.
Whatever their purpose, these deployments of U.S. military aircrafts evidence that Washington is worried about security in several hot spots and is eager to defend its interests anywhere in the world.

North Africa Post's news desk is composed of journalists and editors, who are constantly working to provide new and accurate stories to NAP readers.
NEWER POSTAlgeria to Invest Over $ 24 Bln in Power Projects
OLDER POSTLibya’s Rashad bought by Arqaam