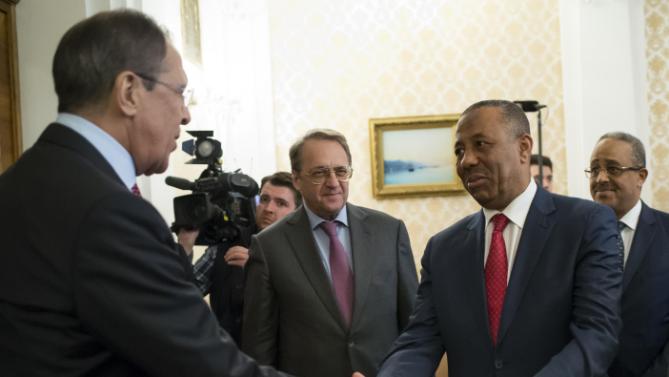 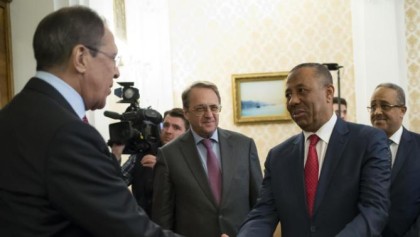 Prime Minister Abdullah al-Thinni of the Tobruk-based government is in Moscow and has called on Russia to support the lifting of the arms embargo on the country as he held the West responsible for the situation in Libya. A U.N-led dialogue for a transitional unity government is about to resume in Morocco but renegade General Khalifa Haftar who now commands forces loyal to the Tobruk-based government said the possibility of reaching a deal is slim.

Thinni told Lavrov that his government will “like to ask Russia to take the side of the Libyan people and support the restoration of state institutions and security measures in the country” by helping to end the arms embargo which is hindering the Libyan armed forces readiness for combat.

Western powers are unwillingly to lift the embargo due to fears that it could further escalate the war with the internationally recognized government controlling only a small part of the country. Lavrov said Russia is working towards stabilizing the situation while focusing on “how best to move towards the restoration of territorial integrity” in Libya.

Thinni’s government urged the U.N Security Council to lift the arms embargo in February but in vain. He said “countries in the West must fully take responsibility on themselves for the chaos in Libya.” Western powers under NATO supported the Libyan uprising that ended Gadhafi’s regime in 2011.

Meanwhile, UN-backed talks in Morocco between the Tripoli and Tobruk governments will soon resume despite the fighting between them. However Haftar told the Associated Press that he would not agree to any ceasefire with armed groups and opined that the war in the country “between militias and terrorists” forces them to bet on a military solution if a deal remains elusive.