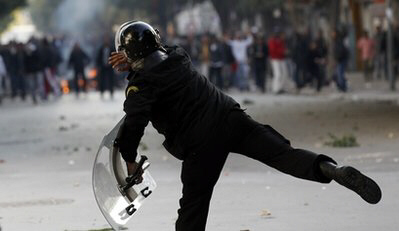 Residents of Tunisia’s two main border crossings with Libya staged a general strike Tuesday to protest against what they say is excessive force by police when clashes demonstrations over the weekend left one person dead. Unions in the two towns want the government to uplift an export tax imposed on goods in the area since October and more job opportunities. The protests in the border towns of Ben Guerdane, near the northern Mediterranean crossing, and Tatouine, near the southern desert Duheiba crossing, are the first major socio-economic challenges of the government after a few days in office.

The government has described the chaotic scenes as “painful events” triggered by the seizure of contraband fuel expected to be coming from Libya. It also claimed that it was studying the export tax. Locals claim that the tax has hampered trade in the area. Only emergency services, chemists and bakers are open for business in the two towns.

Ben Guerdane and Tatouine are heavily dependent on smuggling and informal trade that accounts for more than 50% of the businesses. It is estimated that 20% of Ben Guerdane’s economically active population lives off trafficking and around 328,000 tons of contraband products pass through its crossing point with Ras Jedir in Libya.

Tunisia’s democratic transition is still being threatened by economic hardships and the war in Libya. Abdelkrim Harouni, a parliamentarian with the Islamist Ennahda party, told a local radio station that “every development in Libya has a direct impact on Tunisia.”

Smuggling of contraband products has been detrimental to government coffers. A World Bank report in December 2013 stated that cross-border smuggling with both Libya and Algeria was costing Tunisian at least $675m per annum.