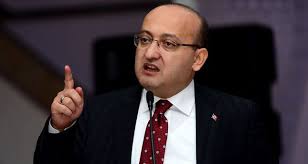 Deputy Prime Minister Yalcin Akdogan has called on the Kurdistan Worker’s Party (PKK) to disarm before or on 21 March and has urged imprisoned Kurdish rebel leader Abdullah Ocalan to renew his demand for disarmament despite acknowledging that the leader’s “role is being undermined by the organization from time to time.” The Turkish government and the PKK have been fighting for almost 30 years although the past few years have been relatively calm. 21 March will mark the beginning of the Kurdish New Year, or Newroz. A similar disarmament call was made by Ocalan at the beginning of the current year.

Akdogan was speaking at the private A Haber channel when he made the request which seems to be the first time that a government official publicly urged for the disarmament of the PKK. He said the government is the “guardian of this (peace) process” which is “ongoing” and still on “track.” He admitted that “Ocalan definitely has a role” to play because he has influence on “PKK organization’s constituents.” The Deputy Prime Minister said the rebel leader’s voice to the call will be “meaningful” even though not all of his messages are heeded to by the rebels.

Turkish Prime Minister Ahmet Davutoglu also vowed that peace with the Kurds would be achieved, seeking support from the country’s largest minority group ahead of the parliamentary elections in June.

Kurdish rebels started to pull out of Turkish territory in 2013 but decided to suspend it as they accused Ankara of not honoring promised reforms. Negotiation began a year later but the wars in Syria and Iraq have jeopardized it. An optimistic Akdogan said “there must be a call for laying down all arms and ending actions against Turkey.”