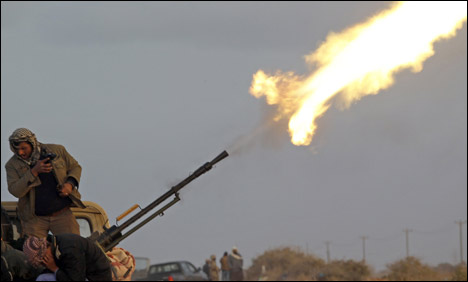 Fighting for the control of eastern oil ports have broken out after Fajr Libya launched an operation to “liberate oilfields and terminals.” Last week, President Al Thinni of the Tobruk government said means are being developed to ensure that the payment of oil exportations to accounts that are not under their control be stopped. Fighting between militants of the two governments over the ports is continuing with both sides claiming to have made advances.

Es Sider and Ras Lanuf are the two oil ports in the east that the two groups are fighting over. They are the country’s biggest oil export terminals. The National Oil Corporation shutdown the two ports by declaring a force majeure. It is also urging the two rival groups to spare the country’s energy infrastructure in their battles. The war has badly affected Libya’s oil production capacity.

The Tobruk government stopped the militants allied to Tripoli from taking over the oil ports with airstrikes. Tensions have also flared over for the control of the Ras Jdir border crossing point to Tunisia. Omar al-Sanki, interior minister of the Tobruk government, said they have seized the border crossing but a Libyan border official and the mayor of Zuwara, a town east of Ras Jdir, denied such claims saying that they are in charge.

The intense confrontations between the two rival governments will hamper UN efforts to resume peace talks in the coming days. Since the end of the Gadhafi regime by the rebels that were helped by NATO, Libya has been dipped into violence as different armed groups aspire for power and influence in the country.