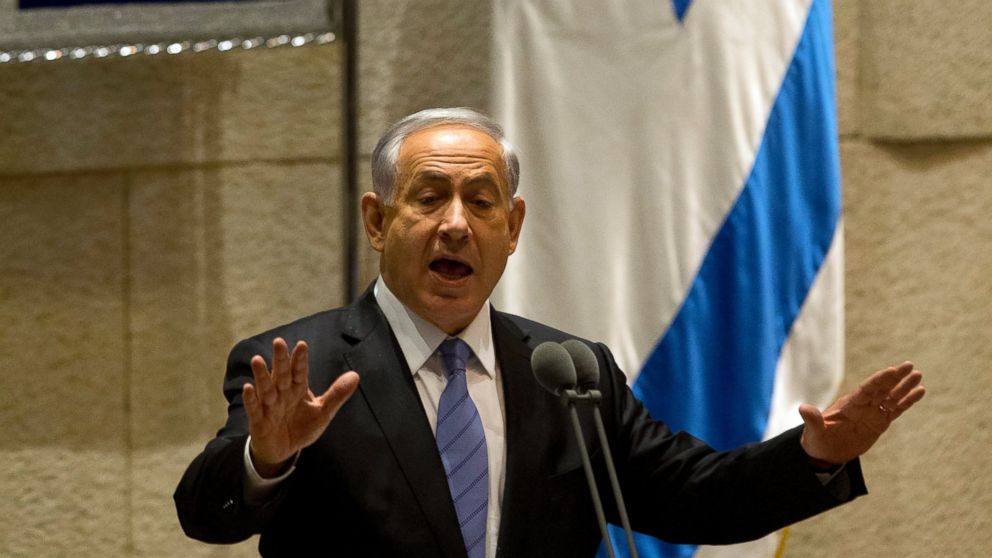 Netanyahu shouldn’t mind the chicken shit slur from the US

Netanyahu shouldn’t mind the chicken shit slur from the US. It was almost a compliment coming from Obama’s camp. Think of it as foreign policy which you buy in a flat pack.

Obama’s failed Middle East strategy goes from farce to comedy and back again almost as quickly as John Kerry gets on a plane. The foreign policy on-a-hoof decisions are having quite an effect though on Palestine, Israel and the war in Syria. But most of all it is the Europeans – of all people – who are finally realizing that he is following a doctrine which would make most editors on the defunct and disgraced British tabloid, The News of The World, blush: make it sing, make it dance, but above all make it up.

Last week Sweden officially recognized the state of Palestine, Stockholm’s foreign minister said, less than a month after the government announced its intention to make the controversial move.

Recently the vulgar term was leveled at Israel’s PM via an anonymous contributor to The Atlantic. Yet the concept of wholesale cowardliness is more appropriate to the US and Europe than Netanyahu. A leader who only thinks of his only political legacy and short term credos is hardly the exclusivity of the Israeli PM – but more the maverick branding of US presidents like Obama. Or European leaders of Scandi countries who collaborated with Hitler during WWII and have no effect whatsoever on the world stage either in Brussels or Washington. Sweden represents many ‘chicken shit’ EU countries who are impotent when it comes to trying to tackle Israel’s abhorrent policy towards Palestine: keep it piss poor, backward, corrupt and with a proxy of Iran and Gulf backers giving arms and keep stealing their land in tiny nuggets – just small enough not to create any international hue and cry.

Yet the move by an EU lightweight foreign policy player, Sweden – don’t laugh –  is not expected to calm tensions building now between Israel and Palestine as PM Netanyahu ploughs forward with yet another illegal settlement plan expected to derail any hopes of a Palestinian state. But Sweden’s recognition of the state of Palestine on paper at least settles the consciousness of EU countries who know that the EU executive powers in Brussels can do little to bring Israel into line – despite the fiery rhetoric recently spouted by Brussels over Israel’s latest land grab.

But it’s all Obama’s fault. What we are witnessing now on a daily basis is the slow but sure erosion of Washington’s relations with the Israeli coalition government – largely because of years of desk pounding by Israel over the ‘threat’ of nuclear Iran being ignored.

The payback is considerable. Now, Netanyahu is allowed to appease his own hardliners with scandalous Palestinian land grabs comfortable in the knowledge that Obama’s own shuttle diplomacy poodle, John Kerry, is never going to as much as issue an angry email against the power of Israel and its wealthy lobby in Washington. American simply cannot afford to pull the plug on its $3bn bung each year to Israel to buy American arms. And why would it? Business is booming in the US with arms makers celebrating a bumper year of profits and fat cat bonuses as share prices just keep climbing all thanks to Obama’s latest stroke of genius: the IS Bang Bang club. What an extraordinary sensational piece of political craftwork to bring the Arab states on board – and then scoop massive arms contracts as that nice lady pilot in the UAE air force needs restocking rockets. US arms makers like Lockhead Martin are literally making a killing at the expense of the Gulf coalition of Arab states who were convinced to bomb the extremists – the same extremists that some of them were even backing financially themselves until just a few week, or chopped heads, ago.

But has there been some lobbying going on in Brussels of the Americans who have nudges and winked at the EU gravy train and pointed a grimy, sweaty finger at illegal settlements of Israel’s – those very plots which form an essential part of a new Palestinian state? You betcha.

Faster than a Diva Italian foreign minister on a Vespa whizzes into a new Brussels top paid job which was entirely crafted by EU bed-wetting from France and Germany – which both wanted a socialist, woman from a Mediterranean country – the European union is suddenly very concerned about the Israeli PM behaving like a lunatic. But wait. Hasn’t he been a raving nutter for many years now? Didn’t he just invade Gaza and kill hundreds of women and children, destroying property reckoned to cost $4bn just to restore? And do Israelis even believe it was worth it?

For Sweden, the move is more about their own impotent foreign policy and seeing to be active in the region. “Today the government takes the decision to recognize the state of Palestine,” Foreign Minister Margot Wallstrom said in a statement published in the Dagens Nyheter daily.

“It is an important step that confirms the Palestinians’ right to self-determination,” she said, adding that “we hope that this will show the way for others.”

Sweden’s new Prime Minister Stefan Loefven announced in his inaugural address to parliament in early October that his country would become the first EU member in Western Europe to recognize a Palestinian state.

While the Palestinians cheered the move, Israel summoned Sweden’s ambassador to protest and express disappointment.

Israel has long insisted that the Palestinians can only receive their promised state through direct negotiations and not through other diplomatic channels.

Seven EU members in eastern European and the Mediterranean have already recognized a Palestinian state — Bulgaria, Cyprus, the Czech Republic, Hungary, Malta, Poland and Romania. Non-EU member Iceland is the only other western European nation to have done so.

The United States cautioned Sweden against recognition, calling it “premature” and saying the Palestinian state could only come through a negotiated solution between Israelis and Palestinians.

In the recent announcement, Sweden’s foreign minister said that “the government considers that international law criteria for recognition of a Palestinian state have been fulfilled.”

Or in other words, ‘we have fulfilled all we are ever going to do again for 50 years for Palestine and our voters are happy that we did something which made us look sort of different and not a clone of Washington’. But as Israel’s foreign minister quipped appropriately, the Middle East peace process is not like IKEA furniture. Some would argue both have a habit of collapsing just when you least expect it.
Twitter:@MartinRJay