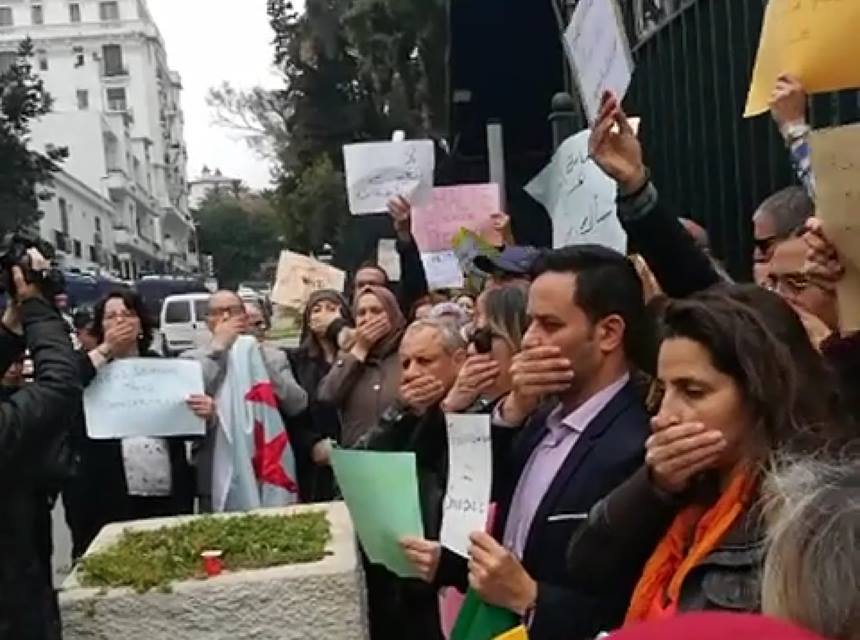 The Committee to Protect Journalists (CPJ) and the Washington-based rights group the Tahrir Institute for Middle East Policy (TIMEP) have condemned the Algerian authorities’ continuing repression, harassment, persecution and arbitrary detention of journalists.

In a joint report they submitted to the United Nations Human Rights Council for its upcoming periodic review in Geneva, the two independent NGOs say journalists in Algeria have increasingly faced pretrial detention and judicial harassment, and many local and foreign news websites have been blocked in the country.

Algerian authorities have increased their crackdown on activists, journalists, and media outlets, obstructing the free flow and access to information.

Journalists and Hirak activists who organize and report on demonstrations via social media platforms have been routinely subject to various forms of harassment and targeting, including arbitrary interrogation and arrest, detention, and criminal prosecution.

CPJ and TIMEP condemned the use of overly-vague legal provisions under the Law on Information (Law No. 12-05), Penal Code, and a series of executive decrees and ordinances to crackdown and criminalize freedom of expression.

They slammed the targeting of foreign and local news outlets and websites reporting on the country’s political landscape, under the pretense of failing to comply with national broadcast licensing regulations and/or spreading false news.

The Algerian authorities have also revoked the press accreditations of many local and foreign journalists and news outlets in a bid to muzzle critical voices, said CPJ and TIMEP.

The two US-based NGOs called on the Algerian government to immediately release all imprisoned journalists and amend the penal code to prohibit the prosecution of journalists under laws not related to journalism.

While the joint report was submitted to the UN body, an Algerian court handed a death penalty sentence this week to journalist Abderrahmane Semmar known as Abdou Semmar.

Semmar, who is the editor-in-chief of Paris-based Algeria Part news outlet, known for its opposition to the Algerian regime, was sentenced for having published news about corruption within Sonatrach.

According to media sources, former Sonatrach Executive Lamine Ouis, received 10 years in prison for having shared “misleading and confidential information” with Semmar.