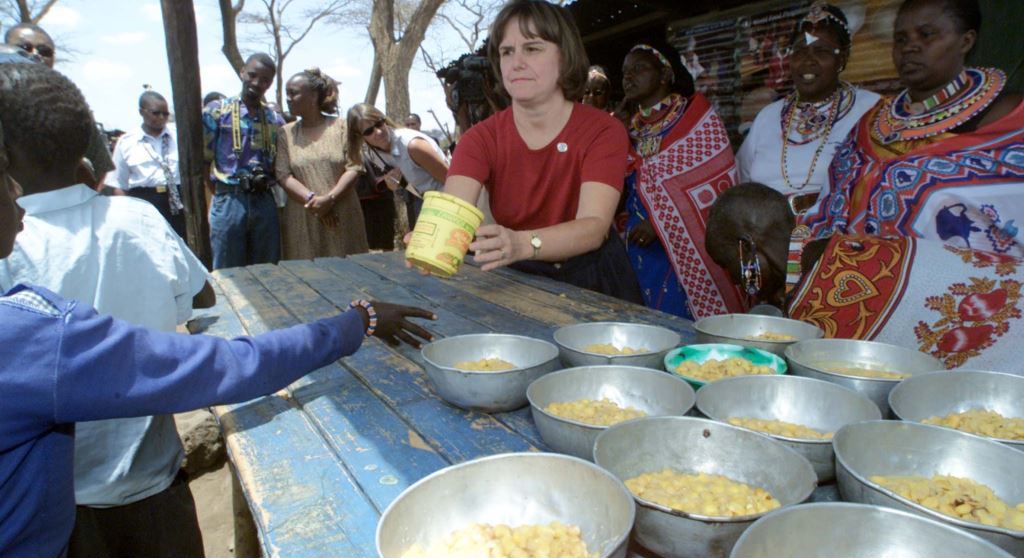 UNITED NATIONS – “The current crisis in South Sudan, Iraq, and Syria and the outbreak of Ebola are stretching the abilities of the United Nations,” said Bettina Leuscher, Chief Spokesperson of the World Food Program (WFP) on September 21st in a panel discussion organized by the United Nations Foundation in New York.

In less than 100 days, the United Nations’ ambitious blueprint for development – the eight Millennium Development Goals – will expire.

This agenda is the world’s most broadly supported and comprehensive development initiative. International leaders adopted it in 2000.

Yet, ongoing turmoil in the Middle East and the recent outbreak of Ebola are impeding the MDGs’ achievement by the target date.

International organizations have reached their financial limit due to conflicts’ exponential growth.

“We had to make the most difficult decision an aid organization can do,” said Ms. Leuscher in reference to the ration cuts for life-saving assistance to about six million Syrians.

The WFP gets its funds from governments, private businesses and individuals. Still, it needs US$95 million to support people inside Syria and US$257 million to help refugees in neighboring countries.

Syria has been caught in a devastating civil war since March 2011. In addition, the extremist Islamic State of Iraq and the Levant (ISIS) declared a caliphate in June 2014, prompting many civilians to flee Syria and Iraq. The jihadist group grew out of Al Qaeda in Iraq.

“We cannot leave the Syrian people alone. They are on the run and caught in a nightmare civil war,” said Ms. Leuscher.

“This is absolutely heart breaking.”

From October 2014, displaced Syrians will get smaller food parcels and only 60% of the aid they usually benefit from. This percentage could be down to 40% by November 2014.

In Turkey, 170,000 Syrian refugees living in camps could go without assistance next month, according to the WFP.

The war in Syria has displaced large communities who now live in the most precarious conditions. The Syrian government estimates that about 4.25 million people are displaced internally.

In addition, some 141,000 Syrian refugees are registered in the Middle East, especially in Egypt, according to UNHCR.

In the last 24 hours, some 66,000 Syrian refugees have crossed into Turkey to flee from the Islamic State.

“Behind each of the 50 million people displaced, there is a human tragedy,” said António Guterres, the UN High Commissioner for Refugees, at the Social Good Summit sponsored by the UN Foundation in New York on September 21st.

For the first time since World War II, there were more than 50 million displaced persons due to conflicts in 2013.

Mr. Guterres lamented the “environment of impunity and unpredictability” and held accountable the “political leaders who engage in conflicts and completely disregard the suffering of their own people.”

Equally worrisome, the Ebola virus disease – an often-fatal illness for humans – is spreading, further straining the resources of the UN. It broke in Central Africa’s remote villages and has propagated to Guinea, Sierra Leone and Liberia.

These are some of the poorest countries and the virus has taken a big toll on their weak health-care systems and infrastructures.

The average fatality rate for Ebola is around 50%, according to the World Health Organization.

The WFP has brought food to one million people affected by the Ebola outbreak in Sierra Leone and Liberia. It needs to feed 1.3 million people.

Ms. Leuscher stressed the importance of good nutrition not only for health but economic growth.

If children in their first two years do not get the adequate nutrition, they will never develop properly. “Not only is this a critical health issue, this is also a crucial economic problem,” she said.

In fact, nutritional deficiency results in a GDP cut of 2% to 15%, according to a Cost of Hunger study by the WFP.

Population growth in the Middle East and Africa has further stymied International organizations’ ability to come to grips with crisis.

Over the past 100 years, the Middle East and Africa have experienced the highest rate of population growth than any region on the planet. It reached 345.4 million in 2013, according to the World Bank.

The population of the Middle East and North Africa has the second most rapidly growing youth population after sub-Saharan Africa.

First, women burdened with childcare cannot be active in society and politics. “We need to be talking about fertility rate from a different perspective […]. It is not only an issue of empowerment but also an issue of national development,” she said.

Besides, there is a high propensity of violence among young men who move to the cities and cannot find a job. “They become prone to distraction like religious ideologies,” said Ms. Greenslade.

“What we saw in Iraq over the summer is an illustration of this,” she added, in reference to the rise of ISIS.

Some of the most fragile states with a growing youth population include Egypt, Nigeria, Pakistan, Bangladesh and Ethiopia.

“We need a massive global agenda to educate those men for employment and provide jobs,” said Ms. Greenslade.

The UN has struggled to tackle conflicts in the Arab world due to disagreements among Security Council members.

“Syria is a prime example of what the lack of unity in the Security Council can do,” said

Stephane Dujarric, Spokesperson for the UN Secretary-General, in a private meeting organized by the UN Foundation in New York.

UN officials and heads of state have repeatedly called China, France, Russia, the United Kingdom and the United States to unite to protect civilians in war-torn zones.

Yet, on May 2014, Moscow and Beijing vetoed a draft UN resolution supported by other Security Council members and 65 countries to refer the Syrian crisis to the International Criminal Court.