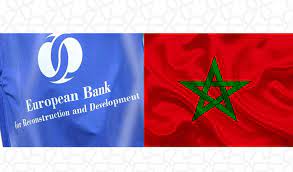 The European Bank for Reconstruction and Development (EBRD) expects Moroccan economic growth to decelerate to 1.1 per cent in 2022, before rebounding the following year thanks to the anticipated agricultural performance and return of other sectors to pre-pandemic levels.

In its Regional Economic Prospects report released this Wednesday, the Bank says economic recovery in Morocco is slowing considerably in 2022, with GDP expanding by only 0.3 pc year on year in the first quarter, following a record 7.4 pc growth in 2021.

According to the EBRD analysts, growth in the country is affected mainly by a sharp contraction in agriculture due to a severe drought. The poor agricultural season is increasing demand for imported food at higher international prices amid global supply-chain disruptions, driving Morocco’s inflation rate up to 5.1 pc in the first half of the year.

In its projections for the economic growth in the southern and eastern Mediterranean (SEMED) region, the Bank forecasts a 1.1 pc GDP growth this year in Morocco due to weak tourism and demand for exports.

For the EBRD, the North African Kingdom remains vulnerable to sharp increases in hydrocarbon prices as it imports most of its energy needs, despite rising levels of renewable electricity generation.

However, 2023 could see a rebound in growth, projected at 3.3 per cent, as agriculture recovers and the pace of growth in other sectors returns to pre-pandemic levels, underlines the Bank.

Regarding its outlook for the southern and eastern Mediterranean region, EBRD says growth will slow from 6 pc in 2021 to 2.9 pc in 2022 due to the negative impacts of the Russia-Ukraine war and spike in oil and food prices.

The new regional economic outlook report, “A cold winter ahead?”, paints a harsh picture of the impact of war on energy markets, inflation and the economies of EBRD regions.

North Africa Post's news desk is composed of journalists and editors, who are constantly working to provide new and accurate stories to NAP readers.
NEWER POSTAlgeria’s domination of Tunisia, implications for human rights
OLDER POSTMorocco: Gold coins worth over $51 K seized in Tanger-Med