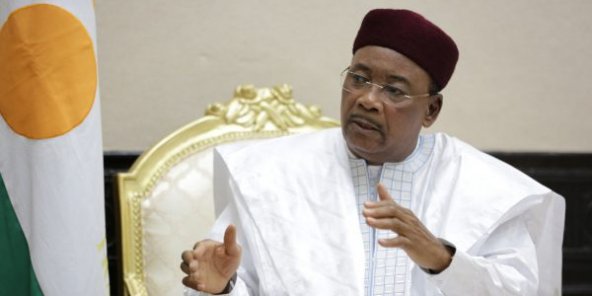 M62, an umbrella of civil society organizations in Niger, Sunday demanded the trial of former President Issoufou Mahamadou that they accuse of high treason for a railway contract given to French business tycoon Vincent Bollore, Anadolu news agency reports.

“We demand the trial of the former President Issoufou Mahamadou by competent jurisdiction for high treason in connection with the construction of the railway,” M62 said in a statement read during a protest demanding the departure of French troops from the poor West African country.

“The M62 will therefore find means to lodge a lawsuit and encourage all citizens, as tax payers, to lodge a complaint,” the statement added.

The railway project dates back to 2014. The administration of the former leader accorded a contract to Bollore to build a 140km railway line connecting capital Niamey to Dosso, a border town with neighboring Benin. The project is part of a regional project dubbed “Boucle ferroviaire,” that will connect Benin, Niger, Burkina Faso and Côte d’Ivoire.

Mahamadou in 2016 inaugurated the Niger portion of the project but the infrastructure has never been used due to several challenges including runoff waters.

In July, both Niger and Benin inked a deal with Bollore to terminate the contract.