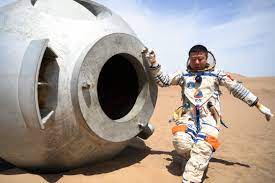 Three Chinese astronauts, known as ‘taikonauts’, recently spoke to students from eight African countries via video link during an event hosted by the China Mission to the African Union (AU), highlighting the increasing collaboration in space between China and African nations who aspire to develop their own ambitions in the next frontier.

The Forum on China-Africa Cooperation (FOCAC) is facilitating the growing China-Africa cooperation in space science and technology, said Mohamed Belhocine, AU Commissioner for Education, Science, Technology and Innovation. He added that FOCAC is helping realize Africa’s aspiration in space science and technology. “With our friends in China, we have a framework of cooperation through the Forum on China-Africa Cooperation. It is in the framework of this forum that we are organizing meetings, which I hope will help the extension of knowledge about space science into our youth in different parts of Africa,” the senior AU official said.

And taikonauts have been playing a role in space diplomacy while on a six-month mission on the Tiangong space station currently under construction. “This event is a reflection of the ongoing collaboration between China and African countries,“ says Temidayo Oniosun, a Nigerian space scientist and managing director of the website ‘Space in Africa.’ “The space industry in Africa is growing at an incredible rate, hence countries and regions like China, Europe, Russia and the US are beginning to compete for a stake in the industry.” Experts note that this latest event was not only a show of soft power on Beijing’s part, but also indicates the importance China is placing on the role Africa can help it play in the global space race.

“These engagements are not necessarily because China and the rest are engaging to help Africa, they’re doing so because they get economic, social and cultural capital in return,” Oniosun told the media. For example, China is second only to the United States in terms of the number of satellites in the world it controls. The construction of remote sensing satellite networks in Africa by China allows Beijing to “support logistical integration of Belt and Road (BRI) partner states” as one of the applications for cooperation in space, according to a 2020 Johns Hopkins School of Advanced International Studies working paper. To that end, Oniosun adds that the African space economy, valued at $19.49 billion in 2021, is forecast to grow by some 16% in the next four years. However, it’s telling that, as of 2022, 13 African countries have a total of 48 satellites, out of which six were built by China and only one by the US.