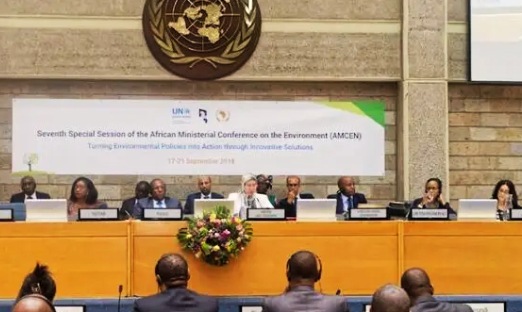 Environmental disasters, food insecurity and the issue of plastic pollution and the burning of waste — these are the main topics discussed by the more than 50 African environment ministers who have gathered in Senegal this week
The African Ministerial Conference on the Environment is taking place in the wake of major flooding and drought throughout the continent, which have aggravated food insecurity, damaged vital infrastructure and cost fragile economies billions of dollars. High on the agenda is also plastic pollution and the burning of waste, which releases methane and other harmful gases into the environment. “If that is not addressed, it will not only end up creating inconvenience in the cities, but at the same time the open burning is causing outdoor pollution,“ Richard Munang, Deputy Regional Director of the United Nations Environment Program’s Africa office. “And so, converting that waste into opportunities like recycling plastic waste into plastic tiles, where young people can learn skills, will create jobs.”
About 600,000 million Africans die from air pollution-related illnesses each year, according to the United Nations’ Environment Program. The ministers are also set to discuss the development of an international agreement on plastic pollution — a major issue in African countries where waste management systems and anti-littering education are often lacking. “We have to ensure that Africa calls out the major causes: the producers who cause the problem of plastic to take action in curbing plastic production, removing harmful substances in the production and looking at the redesign of the product,” said Griffins Ochieng, the Executive Director of the Center for Environmental Justice and Development. John Kerry, the United States’ special presidential envoy for climate, is also expected to attend the conference to discuss methane emissions, climate adaptation and waste management.