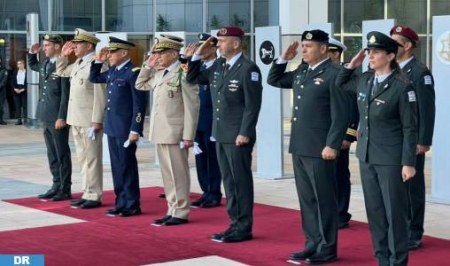 Moroccan top general El Farouk Belkhir, Inspector General and Commander of the South Zone, held a meeting this Tuesday in Tel Aviv with Lieutenant General Aviv Cohavi, Chief of General Staff of the Israeli Defense Forces, said a statement from the General Staff of the Royal Armed Forces (FAR).

The two officials discussed issues of common interest, including ways to strengthen cooperation between the two armies and its expansion to the fields of technology and innovation, the statement said.

Lieutenant General Belkhir El Farouk, who is accompanied by a large military delegation, is visiting Israel, at the instructions of King Mohammed VI, Supreme Commander and Chief of Staff of the Royal Armed Forces, to participate in an international conference on defense innovation.

The event, dubbed Operational Innovation, is organized by the Israel Defense Forces (IDF), and is held in Tel Aviv Sept. 12 to 15. It is attended by chiefs of staff, delegations and delegates of agencies of defense innovation representing 25 countries including Finland, India, Poland, Italy, Czech Republic, Holland, Canada, Germany, United States, the UK, Greece, Cyprus, in addition to NATO.

Morocco’s participation in this international conference is part of a multilateral framework to promote the exchange of knowledge and know-how between the participating armies. It also aims to lay the foundations for a solid collaboration in the field of multidimensional defense and military innovation, the FAR had said in a previous statement that indicated that on the sidelines of the Conference, talks and official meetings are scheduled between the Inspector General of the FAR and the Israeli Defense authorities.

Moroccan and Israeli defense officials have stepped up cooperation after the normalization of diplomatic ties between the two countries.

Morocco is particularly interested in developing defense industries. In November 2021, the two countries signed a memorandum of understanding that established a solid security cooperation framework, formalizing defense relations between them. The MoU allows for increased cooperation in the fields of intelligence, industrial collaboration, military training and more.