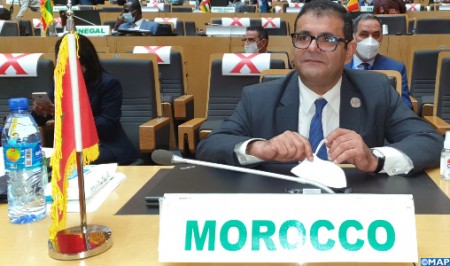 The third meeting of the Monitoring and Support Group for the Transition in Mali (GST-Mali) was held Tuesday in Lomé, Togo with the participation of Morocco.

Addressing the meeting, head of the Moroccan delegation Fouad Yazourh said that this new mobilization of states and partners in the 3rd meeting of the GST-Mali is in line with the spirit of pan-African solidarity, and that it reflects a common desire to consolidate the progress made recently by Mali.

These advances are the result of concerted efforts between different actors in Mali, ECOWAS, the African Union and more broadly, within the international community, the senior official of the Moroccan foreign ministry said, noting that the positive momentum recorded in recent months is a source of optimism for Morocco, in view of the major strides made by Mali, including the adoption of a new electoral law and the establishment of a Commission for the drafting of a new Constitution, the definition of an electoral timetable over a period of 24 months, and the scheduling of presidential elections in February 2024.

While reopening the horizon of stability in Mali and in the entire sub-region, these real advances cannot be sustained without regional and international mobilization, he stressed.

Yazourh highlighted, in this sense, that Morocco, in line with the vision of King Mohammed VI, remains faithful to the ancestral and historical ties that unite it to Mali and the brotherly Malian people.

It is in this spirit that Morocco has contributed, since 2019, to the appeasement of the situation in Mali, he said, recalling that the Kingdom had undertaken, in consultation with the transition authorities, concrete steps to bring together the various Malian actors, including Sufi families around the fundamentals.

He also said that under the leadership of the King, Morocco is working for a better future in Mali.

Morocco has trained more than 500 Malian Imams at the Mohammed VI Institute of Imams, Morchidines and Morchidates, he said, recalling that King Mohammed VI has appointed 8 Malians to the Higher Council of the Mohammed VI Foundation of African Ulema.

He stressed that the new sequence that opens in the transition process of Mali is also an opportunity to question any initiative or process that strives to demonstrate its contribution to the stabilization efforts of Mali.