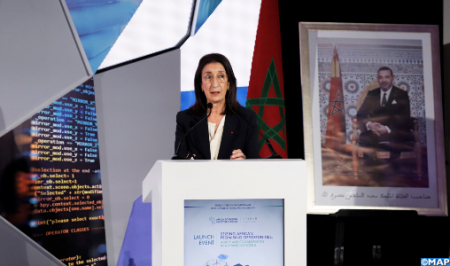 The Nigeria-Morocco gas pipeline project, which is currently in its Front-End Engineering Design (FEED) phase, will contribute to the emergence of an integrated and competitive North-West African zone, said Director of Moroccan National Office of Hydrocarbons & Mines (ONHYM), Amina Benkhadra.

Speaking at a regional African conference on gas and oil, convened in Dakar Sept.1-2, Mrs. Benkhadra said the pipeline project is spearheaded by King Mohammed VI and President Muhammadu Buhari to spur the social, economic and industrial development of Africa.

The project will also facilitate access to energy in West Africa, speed up electrification projects for the benefit of local populations, set up a competitive regional electricity market and export gas to Europe, she added, noting that the pipeline will cross 13 countries on the Atlantic coast and 3 landlocked countries.

This landmark project, which will have a direct positive impact on more than 340 million people, aims to boost the regional economy, encourage job-generating industries, reduce gas “flaring” and promote the use of reliable and sustainable energy, affirmed Mrs. Benkhadra.
In her address before the gathering, Mrs. Benkhadra also surveyed Morocco’s strategy in energy transition that was initiated since the beginning of the 21st century, a period marked by major infrastructure achievements and several structuring projects, particularly in the areas of electrification, transport and renewable energy.

A successful energy transition requires a proactive policy of the State, a commitment of all stakeholders and a regulatory framework of support, she said, mentioning the successful Moroccan rural electrification program, which has achieved an electrification rate of more than 99% against only 18% in 1995. This is a success story worth sharing throughout Africa, she said.

Mrs. Benkhadra also brought up the Kingdom’s energy strategy, explaining that this strategy is based on the development of renewable energy resources, through the implementation of the Solar and Wind Plans (52% of installed capacity in renewable energy by 2030) and the introduction of LNG and natural gas.

In matters of exchange of electrical energy, the ONHYM chief said that Morocco is now positioned as “a major player in the electricity market in the Euro-Maghreb zone and fully plays its role as a regional energy hub and transit country for cross-border exchanges of electricity.

“Thanks to the strategic assets that Morocco has in terms of interconnection infrastructure, it will be able to play a central role in the creation of an African regional electricity market and its integration into the European market,” she noted.

The Dakar conference is held under the theme “the Future of Natural Gas: Growth using Strategic Investment & Policy-making”. It is attended by senior officials from Gambia, Guinea-Bissau, Guinea, Mauritania, Senegal, Morocco, Côte d’Ivoire and foreign investors from the U.S. Australia, Europe, Asia and the Middle East.