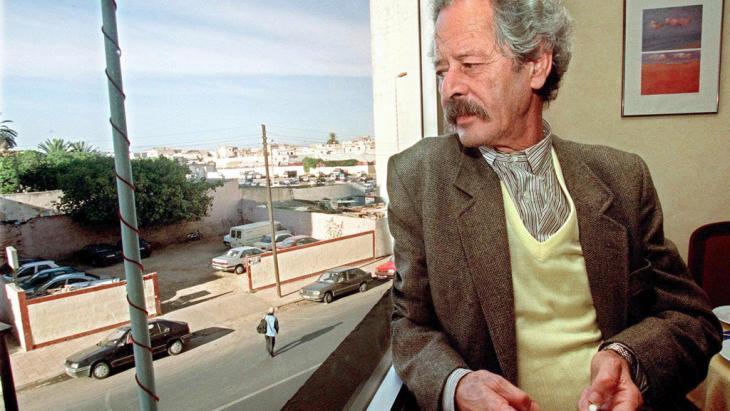 The Mohamed Choukri Foundation announced last week it has set up an international literary Prize in honor of the late Moroccan writer. The Prize will be awarded annually to authors of works of various literary arts from Morocco and other countries from all over the world.
The Mohamed Choukri International Award will be handed over to the winners at the annual Twiza Festival held in Tangier, Mohamed Choukri’s cherished city, said president of the Mohamed Choukri Foundation, Abdellatif Benyahya, who was speaking on the sidelines of the 10th edition of the Twiza Festival held this August 14-17.
The jury will be made up of renowned Moroccan, Arab and international writers, he said.
This year’s Twiza Festival, held under the topic “Africa for Africans,” featured a round table on the life and work of Mohamed Choukri and on how he contributed to enrich Arabic literature.
Mohamed Choukri, who was born on July 15, 1935 and died on November 15, 2003, was a prominent and controversial Moroccan author and novelist best known for his internationally acclaimed autobiography al-Khubz al-Hafi (For Bread Alone,) first published in English in 1973.
Choukri who was raised in a very poor family and who was early in his life homeless never attended school and started learning how to read and write only when he was 20 year old. He later on became a teacher in Tangiers, the cosmopolitan city where he met in the 1960s US expatriate composer, author, and translator Paul Bowles, French writer, poet and essayist Jean Genet and US playwright Tennessee Williams.
Choukri’s first writing was published in the mid-60s but international success came with the English translation of Al-khoubz Al-Hafi in 1973 by Paul Bowles, with Choukri’s assistance. The book was translated to French by Tahar Ben Jelloun in 1980 and published in Arabic in 1982. The book, translated later on into 30 other languages, was however censored in Morocco from 1983 to 2000. The book was banned for having broken all literary rules and religious taboos in the Arab world at that time with the vivid descriptions of the author’s difficult early life and experiences as a vagabond committing petty crimes, drug and alcohol use, prostitution, etc.
Tennessee Williams had described For Bread Alone as “A true document of human desperation, shattering in its impact.”
Besides his autobiographic trilogy that began with For Bread Alone and was followed by Zaman Al-Akhtaâ aw Al-Shouttar (Time of Mistakes or Streetwise) and finally Faces, he also wrote short stories and accounts of his encounters with Paul Bowles, Jean Genet and Tennessee Williams.