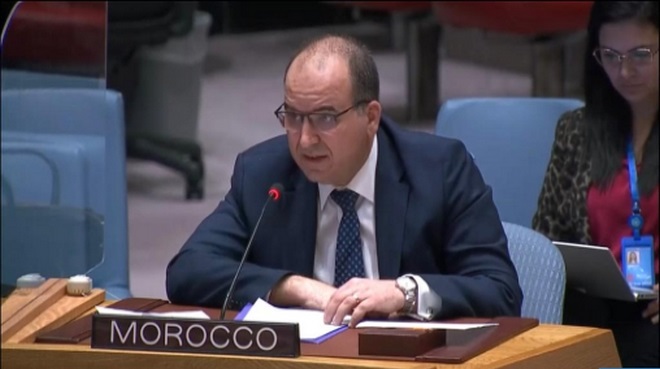 Morocco is working, under the leadership of King Mohammed VI, to prevent conflicts in Africa, focusing on sustaining peace in all its diplomatic activities, said Morocco’s deputy permanent representative to UN Omar Kadiri.

During the Security Council debates on peace & security held lately in New York, the diplomat said his country has been active and engaged for peace in the continent since the 1960s, calling on the international community to support the Kingdom’s efforts.

Regional, sub-regional and international financial institutions, and civil society organizations must work in a holistic approach — especially in view of the effects of the pandemic at every level of society, said Mr. Kadiri.

He urged the international community to honor its commitments on predictable and sustainable financing for development in Africa. Voicing support for the Secretary-General’s call for $100 million in financing from assessed contributions to the Peacebuilding Fund, the diplomat stressed the African Union’s legitimate request for financing for peacekeeping operations authorized by the Security Council.

Africa is witnessing an unprecedented increase in terror threats, he stressed, citing the proven links among terrorism, transnational criminal networks and separatist groups.

A comprehensive approach to the scourge is therefore required, combining the security dimension with economic and human development, underlined Mr. Kadiri.

Morocco, member of the African Union Peace & Security Council, is advancing a new model based on solidarity, he said, insisting on African integration and shared responsibility. He recalled in this connection that his country has sealed over 1,000 partnership agreements with African countries in various development sectors during the past few years.

During the debates, other diplomats highlighted the links between effective governance, peace, security and development in Africa, calling for greater international investment and support for nationally led efforts, and affirming that Africa knows best how to resolve its own problems.

While its partnerships with the UN for peacekeeping and peacebuilding are well-articulated, the adverse effects of climate change threaten the livelihoods of millions in the Sahel and the Horn of Africa, he said, noting that the continent is reeling from illicit financial flows, terrorism and extremism.