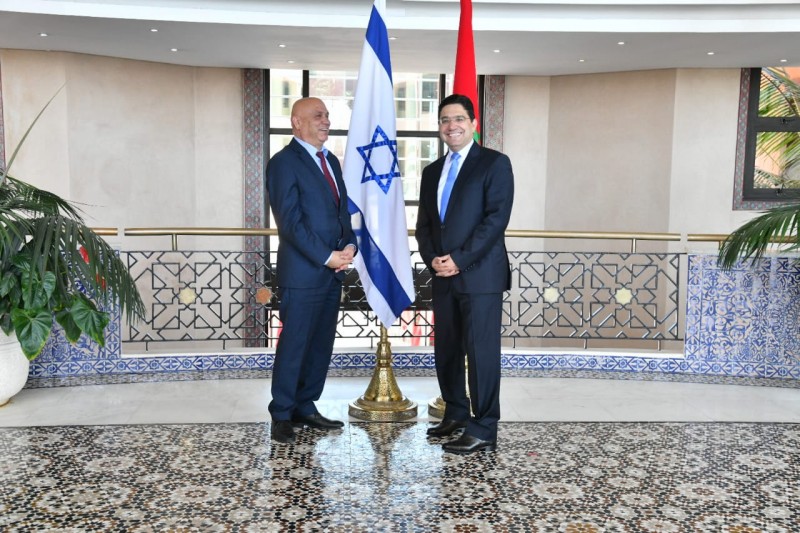 Morocco plays a “key and important” role in the Middle East region thanks to the wise policy of King Mohammed VI, Israeli Minister of Regional Cooperation Issawi Frej said Thursday in Rabat.

Speaking after talks with Foreign Minister Nasser Bourita, the Israeli official stressed that this meeting was an opportunity to discuss the Israeli-Palestinian issue.

In an earlier interview to i24news.tv, Frej pointed out that given the depth of Israel’s ties to Morocco, and the North African country’s credibility in the Arab world, Rabat could play a key role as a mediator in the Israeli-Palestinian conflict.

“The Kingdom of Morocco, is the most mutually acceptable mediator in all the peoples of the region. This is the truth, this is the reality…’ he said, voicing confidence that Morocco will play a key role in the rapprochement.

The Israeli official stressed Morocco’s role in regional politics and noted the presence of a sizable number of Moroccan Jews in Israel.

“Morocco has chaired the Al Quds Committee for decades and citizens from Morocco represent more than a million people in Israel,” he said.

“The process of rapprochement is what creates the ground for future political opportunities,” he argued, noting that he believes in a two-state solution. “The conditions are not ready now, but to create these conditions, trust must be built between the Israeli and Palestinian sides.”

According to the official, the lofty prospect could be well within reach.

Frej’s remarks echo recent comments by senior Israeli, American and Palestinian officials who commended King Mohammed VI for the key role he played in the reopening of the Allenby Bridge linking the West Bank with Jordan.

A senior official of President Joe Biden’s Administration hailed the “key role” played by the Kingdom of Morocco, under the leadership of King Mohammed VI, in mediating the 24/7 opening of the Allenby/King Hussein border crossing.

Israel’s decision to open the border crossing, which is the Palestinians’ only opening to the world, signals the first instance in which an Arab country has used its might to mediate between Israelis and Palestinians to produce “a significant policy change,” the US official said, as reported by a leading Israeli newspaper.

The mediation efforts led by the Kingdom of Morocco and the United States, with senior Israeli, Jordanian and Palestinian officials, constitute a collective dynamic “that made the difference,” he said, adding that “we are delighted to see the Abraham Accords working to the benefit of the Palestinians – this has been a priority for the Biden administration”.

Israeli Minister of Transport, Merav Michaeli, had also praised the major role played by King Mohammed VI, for the reopening of the Allenby/King Hussein Bridge and had thanked the Sovereign, the Kingdom and US President Joe Biden for their continued commitment and efforts to promote peace and prosperity in the Middle East.

“His Majesty the King has played a decisive role in this important process for the reopening of this crossing,” the Israeli transport Minister had told Moroccan Medi 1 TV channel, praising the King’s willingness and initiative for cooperation from all the parties involved.

She praised “the Sovereign’s firm commitment to peace in this region, affirming that “this resolve will remain a very useful factor in the future”.

Morocco had thus succeeded in brokering the permanent reopening of the Allenby border crossing, which will have a beneficial impact on the daily lives of Palestinians and facilitate the movement of people and goods.

Issawi Frej who is on a working visit to Morocco this week held talks with several cabinet members on ways to intensify relations and contact between the Moroccan and Israeli societies, to consolidate development in several areas, including the political field, to strengthen the bases of cooperation in the sector of tourism and to create opportunities in the field of high technology in Morocco, so that the youth can benefit from this progress.