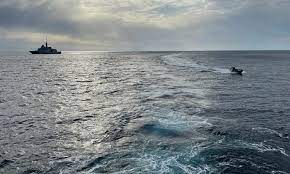 Morocco, in line with its international commitments and its ratification and implementation of a number of conventions relating to the fight against accidental marine pollution, is organizing this June 21-23 the national simulation exercise named “SIMULEX-22”.

The exercise, held pursuant to the high instructions of the King, Supreme Leader and Chief of Staff of the Royal Armed Forces (FAR), is taking place off Mohammadia.

This exercise, which puts into practice the common procedures of the fight against accidental marine pollution and the delivery of assistance to a ship in difficulty, is executed according to the scenario of a collision between a cargo ship and an oil tanker causing the spill of three thousand tons of heavy fuel oil at sea, says a statement from the General Staff of the Royal Armed Forces.

The exercise is meant to evaluate the National Contingency Plan (PNU) on the operational, technical and logistical levels; strengthen cooperation, coordination and interoperability between departments, as well as raise awareness of the issues and interest of training in the fight against marine pollution, said the statement.

Observers from Mauritania and the United Arab Emirates are attending the exercise, which provides an ideal framework to promote the exchange of experience and expertise and achieve the desired objectives in maritime security, the statement said.