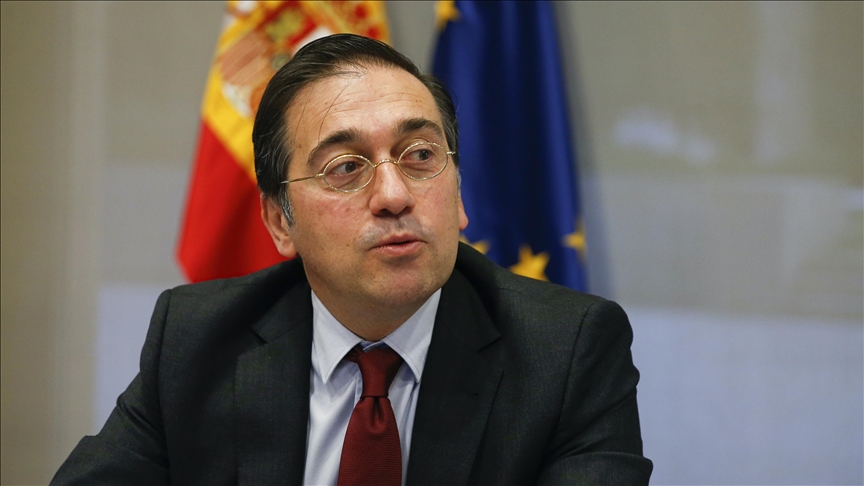 Spain’s Foreign Minister Jose Manuel Albares told reporters on Thursday that the Spanish government will “firmly defend” its national interests in light of Algeria’s decision to scrap a 20-year-old friendship and cooperation treaty.

“We are analyzing the implications and the national and European consequences of that measure in a calm, constructive way, but also with firmness in the defense of Spain and the interests of Spaniards and Spanish companies,” Albares told reporters.

On Wednesday, the Spanish government said it regretted Algeria’s decision to suspend the cooperation treaty, furthering tensions after Madrid reversed its position in favor of Morocco’s autonomy plan for the Sahara.

“The Spanish government regards Algeria as a friendly neighbor country and restates its complete readiness to keep and develop the special cooperation relationship between our two countries, to the benefit of both people,” a Spanish foreign ministry statement said.

The cooperation treaty provided for the strengthening of political dialogue between the two countries in the fields of economy, finance, education, and defense.

On Wednesday, Algeria decided to proceed with “the immediate suspension of the Treaty of friendship, neighborliness, and cooperation which it concluded on October 8, 2002 with the Kingdom of Spain and which governed so far the development of relations between the two countries.”

Following the suspension of the treaty, Algeria also ordered its banks to suspend processing all import and export operations with Spain, in retaliation against Spain’s sovereign decision in support of Morocco’s sovereignty over the Sahara region.

The recent Algerian escalation came after Spanish Prime Minister Pedro Sanchez on Wednesday defended before MPs the decision of his country to support Morocco’s autonomy plan as the most serious and the most credible and realistic solution to the dispute over the Sahara region.

Sanchez said that support for Morocco’s autonomy plan was a sovereign position of the Spanish state and that enhancing closer ties with Morocco was a well-thought strategic choice.

Algeria has already withdrawn its ambassador from Spain in March after Madrid’s policy shift in favor of Morocco’s territorial integrity.

It has also waved the gas card in a blackmail against Spain and threatened to cut gas supplies and hike prices due to Spain’s rapprochement with Morocco.