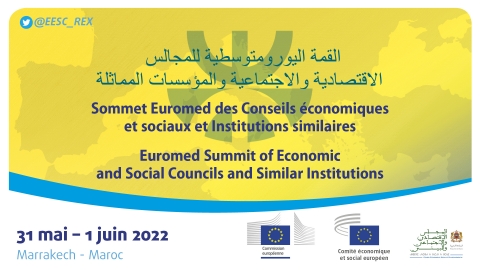 The 2022 Euromed Summit of Economic and Social Councils and similar institutions kicked off Tuesday in Marrakech, under the theme “COVID-19: the role of civil society in the reconstruction and resilience of the Euro-Mediterranean region.”

The summit, organized by the European Economic and Social Committee (ECSC) and Morocco’s Economic, Social and Environmental Council (CESE), analyzes the post-covid challenges facing the Euro-Mediterranean region, means to mitigate the impact of the pandemic and reconstruct the economic and social sectors as well as the various opportunities revealed by the COVID-19 to promote sustainable development in the Euro-Mediterranean region.

Addressing the opening session, the President of the EESC, Mrs Christa Schweng, called for the adoption of recovery plans in the Mediterranean area, with measures to improve the economic, social and environmental situation.

In this context, she stressed that the recovery must be guided by principles, such as respect for the rule of law, the protection of democratic values and a shared commitment to the Sustainable Development Goals and climate neutrality, indicating that trade can be used as a lever for sustainable and inclusive economic growth.

She also emphasized the need for cooperation on the environment and climate between the countries of the Mediterranean area to create more jobs in the blue economy and protect biodiversity. Cooperation should also be strengthened in areas such as an effective vaccination campaign and a rapid recovery of SMEs and the tourism industry, she insisted.

As to the role of civil society, Mrs Christa Schweng called for the greatest possible involvement of civil society organizations in order, among other things, to better protect young people, women, migrants and people with disabilities.

Mrs Christa Schweng also dealt with the relations existing between the European ESC and the Moroccan EESC that she described as excellent, and cited as an instance the creation of the EU-Morocco Joint Consultative Group, to make the voice of civil society heard in the negotiations for a Deep and Comprehensive Free Trade Agreement (DCFTA) between the EU and Morocco.

Taking the floor, the Deputy Secretary General of the Union for the Mediterranean (UfM), Abdelkader El Khissassi, recalled the mission of this intergovernmental organization that aims, he said, at strengthening cooperation and dialogue at the regional level and to promote the implementation of concrete regional projects having a direct impact on citizens, in particular young people.

The Covid-19 pandemic, which has affected the economies of all countries without exception, has exacerbated the inequalities between the northern and southern shores of the Mediterranean, he said, emphasizing the part euro-Mediterranean cooperation can play to mitigate the negative repercussions of this global health crisis.

He also highlighted the role of civil society in the context of post-Covid-19 recovery, explaining that NGOs and associations have extensive experience and a vast network that covers rural and remote areas.

Touching on the projects launched by the UfM, Khissassi focused on the regional Team Europe Initiative, recently launched by the European Union (EU) with the aim of contributing to the implementation of the new agenda for the Mediterranean and its economic and investment plan.

The Euromed summit features a special session on “Debriefing on disaster management in the Mediterranean”, in addition to plenary sessions on “Covid-19: the role of civil society in the reconstruction and resilience of the Euro-Mediterranean region”; “Renewed partnership with the Southern Neighborhood”; and “Networks in the Euro-Mediterranean area – developing regional cooperation”.

It also includes workshops focusing on topics such as “the road to economic recovery”; “Mitigating the social impact of COVID-19”; and “the impact of COVID-19 and the Ukraine war on sustainable development in Euromed”.

The event is bringing together some 120 participants from economic and social councils, or similar institutions, representatives of employers, trade unions, other economic & social interest groups as well as NGOs from member countries of the Union for the Mediterranean.

The European Economic and Social Committee will elaborate an information report on the main theme of the summit, in close cooperation with its counterparts in the southern Mediterranean.