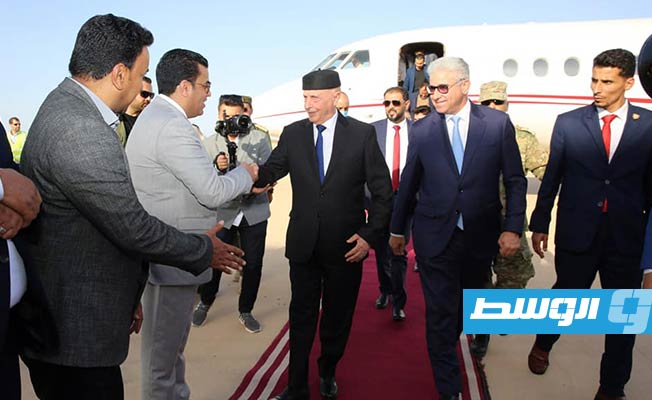 Aguila Saleh, Speaker of the Libyan parliament and Fathi Bashagha, one of Libya’s rival Prime Ministers, arrived Monday in the city of Sirte for the chamber meeting of Tuesday to discuss the draft general budget law for the year 2022 submitted by the former Interior Minister.

Saleh landed at Al-Qardabiya Airport on Monday evening and was welcomed by Bashagha and members of the House of Representatives, Zayed Hadiya, Hassan Al-Zarqa and Ismail Al-Sharif.

Saleh’s spokesman Abdulla Bliehiq indicated that the meeting will be attended by the Presidency of the House of Representatives, HoR’s Planning, Finance and General Budget Committee, the Prime Minister-designate Fathi Bashagha, Minister of Planning and Finance, Osama Hammad, and representatives of a number of relevant institutions, namely: the Board of Directors of the Central Bank of Libya, and the Control Authority Administrative Board, the Audit Bureau, the Board of Directors of the National Oil Corporation, and the Anti-Corruption Authority.

The head of Libyan parliament last Thursday sent an invitation to the above-mentioned state officials to the meeting. Bashagha was designated Libya’s interim Prime Minister in February by the chamber which ended the term of UN-backed Abdel Hamid Dbeibah. The latter however refused to surrender power and has remained in office.

Bashagha has presented a $20-billion draft budget for 2022. He has promised to organize elections in 14 months.