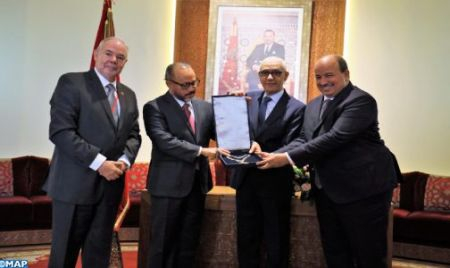 King Mohammed VI has been awarded the “Esquipulas Peace Prize»; the highest distinction bestowed by the regional parliamentary organization FOPREL.

The Forum of Presidents of Legislative Powers of Central America, the Caribbean and Mexico (FOPREL) awarded the distinction to King Mohammed VI, under a resolution adopted at the opening of the 26th extraordinary session of the Forum held at the headquarters of the Moroccan Parliament this May 19 – 21.

The awarding of this prize comes as a token of “homage and consideration to the wisdom and courage of HM the King, who carries high the general interest, to reject differences and work constantly to achieve peace between peoples,” according to the text of the resolution.

The FOPREL, where Morocco has an observer member status, stresses, in this sense, that King Mohammed VI is “a model to follow” for all those who work to respect and preserve the values of peace among different cultures and peoples of the world.

This award also comes in recognition of the sustained efforts that the Sovereign has made, since his accession to the Throne, in the service of the promotion of peace, states the resolution.

The “Esquipulas Peace Prize” aims to promote the ethical and spiritual values of civic friendship, understanding, tolerance and solidarity among peoples, as well as respect for human rights, which are components of the authentic culture of peace.

The award is named after the Guatemalan city of Esquipulas, where five Central American countries (Guatemala, El Salvador, Honduras, Nicaragua and Costa Rica) signed a Declaration in 1986 and later the Peace Accords in 1987, which marked the beginning of the march towards peace in the region.

Created in 1994, the regional parliamentary organization seeks to strengthen the development and harmonization of legislation in member countries and to develop mechanisms for consultation among the presidents of their legislative institutions to address the challenges facing the region, in addition to supporting legislative studies at the regional level.