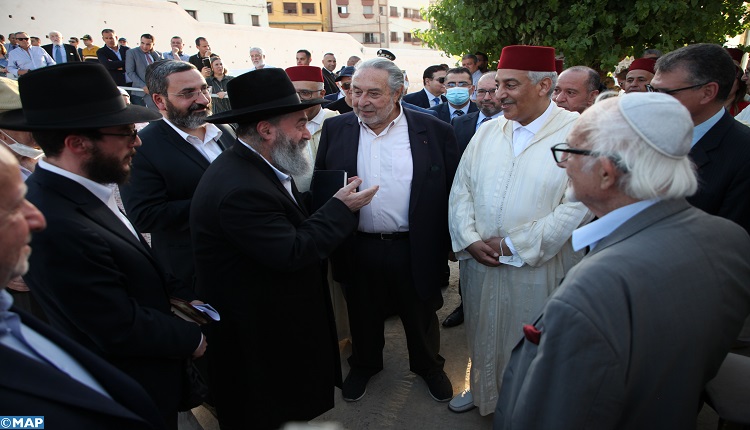 Members of the Moroccan Jewish community gathered on Wednesday at the historic Jewish cemetery of Meknes to celebrate the Hillula of Tzadikim for the first time in 60 years.

Placed under the High Patronage of King Mohammed VI, Commander of the Faithful, the Great Hillula of Tzadikim of Meknes was celebrated by members of the Jewish community from Morocco and several foreign countries including France, Belgium, Canada and Israel.

The Hillula is celebrated for the first time in 60 years in Meknes, and comes after the completion of the rehabilitation of the Jewish cemetery, at the initiative of King Mohammed VI.

Speaking at the opening of the celebrations, the Secretary-General of the Council of Jewish Communities in Morocco, Serge Berdugo, shed light on the rehabilitation of the old Jewish cemetery of Meknes, an initiative that was prompted by the decision of King Mohammed VI, Commander of the Faithful, regarding the rehabilitation of Jewish cemeteries in Morocco. The royal initiative has allowed the safeguarding of more than 170 necropolises, which have regained their dignity to the satisfaction of the families of the deceased, he said.

The cemetery of Meknes is unique with tombs embedded in the historic wall, Berdugo said, adding that the celebration allowed 500 Moroccan Jews, most of whom are from Meknes, to come together and find a part of themselves.

This event was also marked by the inauguration of the rehabilitation of the Museum of the Mellah, a museum space containing “priceless documents such as the Ketuba – the marriage certificate of Rabbi Raphael Berdugo.”

The Chargé d’Affaires of the US Embassy in Morocco David Greene, who attended the event, said that during his years in Morocco, he learned a lot about the Kingdom’s history of tolerance and coexistence between Jews, Muslims, and Christians. “Morocco is a country that welcomes all faiths,” he stated.

The Head of the Israeli Liaison Office in Morocco David Govrin, several rabbis, and a number of other officials and figures attended the celebration.

In another development, the Association for Culture and Industry Morocco-Israel (ACIMI) organized, Wednesday in Demnate, a conference under the theme “Demnate, past and future” that discussed ways to develop cooperation between Demnatis of Morocco and Israel.

Organized in cooperation with the Committee for the Preservation of the Heritage of Demnate (CPHD), the conference focused on the importance of preserving the civilizational character of the city of Demnate and its rich Judeo-Moroccan legacy as a symbol of Morocco’s plural national identity.

The conference, which was marked by the participation of 30 Israelis from the thousand-year-old city of Demnate, was an opportunity to highlight the Kingdom’s constant interest in the preservation and promotion of the Hebrew component, and to discuss ways to increase investment on both sides for the benefit of the city.

Speaking on this occasion, ACIMI President Khalid Fataoui highlighted the unwavering commitment of Morocco to preserve the Hebrew identity for Moroccans of the Jewish faith, while emphasizing the specificities of the city of Demnate and its rich heritage and the importance of taking advantage of this diversity to serve the development of the city of Demnate.

He recalled the unwavering commitment of Moroccans of the Jewish faith to the Alaouite Throne, stressing the imperative to encourage investment on both sides and to pave the way for Moroccans in Israel to actively participate in the preservation of the Jewish-Moroccan memory.

For her part, Maguy Kakon, a member of the regional human rights commission in Rabat, said that the relationship between Morocco and Israel is an example to follow, recalling the leading role played by the Kingdom in the rehabilitation and restoration of the Jewish-Moroccan heritage.

Morocco is an example of plurality, living together and conviviality, she said, recalling the importance of youth in the restoration of this heritage and the promotion of this plural national identity.

For his part, the co-founder of the CPHD, Yehuda Dahan, said that the ties between Demnatis of Israel and Morocco are strong and enduring. He also highlighted the Kingdom’s commitment to the restoration of the Jewish-Moroccan heritage.

The conference, which was held in the Kasbah of Amghar, a few steps from the beautiful natural bridge of Iminifri, focused on the Jewish heritage of Demnate between past and future, the development initiatives of the city of Demnate, and cooperation between Demnatis in Morocco and Israel.

North Africa Post's news desk is composed of journalists and editors, who are constantly working to provide new and accurate stories to NAP readers.
NEWER POSTWashington to reduce economic assistance to Tunisia over democracy deficit
OLDER POSTMichigan Senate adopts resolution for imports of fertilizers from Morocco