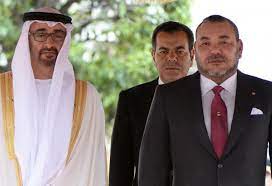 King Mohammed VI has sent a message of congratulations to Sheikh Mohammed bin Zayed Al Nahyan, on his election Saturday President of the United Arab Emirates by the Federal Supreme Council, expressing his confidence that relations between the two countries will become more solid and stronger thanks to the shared will to raise them to a level that “serves as a model in inter-Arab relations.”

In this message, the King expressed to Sheikh Mohammed bin Zayed Al Nahyan, in his personal name and on behalf of the Moroccan people, his warmest congratulations and best wishes, praying the Almighty to guide his steps and grant him success in leading the brotherly Emirati people towards more progress and prosperity.

The Sovereign said he is convinced that Sheikh Mohammed bin Zayed Al Nahyan will be, thanks to his high human qualities and the insight of great leaders, a worthy successor of a worthy predecessor, to lead his country to greater greatness, glory and progress, while pursuing, something that is not strange to his honorable person, the defense of the just causes of the Arab and Islamic Ummah and the reinforcement of the relations of cooperation and solidarity between its States.

The Sovereign also expressed in his message his deep satisfaction with the bonds of sincere brotherhood, mutual esteem and constant fidelity that link him personally to Sheikh Mohammed and that link the two families, and hailed the relations of active solidarity and fruitful cooperation that unite the two countries.

These bonds will, we have no doubt, become more solid and stronger thanks to Our common will to raise our distinguished bilateral relations to a level that serves as a model in inter-Arab relations, King Mohammed VI said, reiterating to Sheikh Mohammed his sincere congratulations and best wishes for full success in the service of the brotherly Emirati people, and praying God to grant him good health, prosperity and long life.