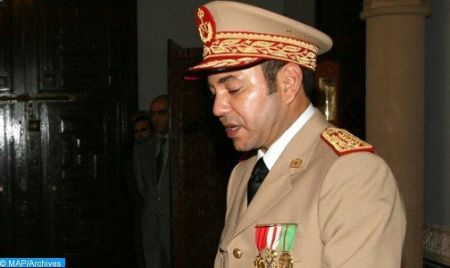 On the occasion of the 66th anniversary of the creation of the Royal Armed Forces (FAR), King Mohammed VI, Supreme Commander and Chief of General Staff of FAR, sent an order of the day to officers, non-commissioned officers and privates.

In this Order of the Day, the King renewed Morocco’s commitment to the United Nations peacekeeping operations and announced in this connection that this commitment will be reinforced by the creation of a multidisciplinary Moroccan Peacekeeping Center.

“This commitment will be reinforced, God willing, by the creation of a multidisciplinary Moroccan Peacekeeping Center whose mission will be to train and support national and foreign skills, particularly on the African continent, in partnership with the United Nations and certain friendly countries, in order to promote the principles of international security and peace,” the Sovereign pointed out in the Order of the Day.

The Sovereign also renewed the pledge to continue strengthening the defense capabilities of the Army, saying “We will continue to give priority to the plan of equipping and upgrading the Royal Armed Forces, according to integrated programs, based in particular on the establishment of military industries and the development of scientific research, through the conclusion of a series of partnerships and agreements with research centers and Moroccan universities for the implementation of projects with high technical value, the objective being to develop the self-equipment of our Armed Forces in various fields.”

In parallel with this approach, the Sovereign said he has advocated the strengthening of cooperation between the Royal Armed Forces and their counterparts in brotherly and friendly countries. This “choice has yielded commendable results and contributed to the consolidation of the influence of Our Army and its international presence, thus strengthening your credibility and enriching your knowledge base in the service of the enshrining of the values of peace and security, in which we all believe, and which should prevail between Nations and Peoples.”

Based on this basic principle, and thanks to the experience accumulated by the Royal Armed Forces, Morocco has become today an active and reliable partner in peacekeeping operations, through the participation of our units by various contingents and by our military officials within the structures of the United Nations organizations, he stated.

The Sovereign commended the FAR’s resilience and their determination to face all the desperate attempts to undermine Morocco’s territorial integrity and solid national constant values.

“The positive results of your valuable achievements during the past year make us proud of your availability, your discipline and your spirit of dedication to the service of the Homeland,” the King said, hailing the soldiers deployed in the Kingdom’s Southern and Eastern provinces, or those in charge of guarding the land, air and sea borders, with vigilance and firmness, and expressing pride at what they do to preserve the unity of the homeland and the security of citizens.

King Mohammed VI also expressed his deep conviction in the importance of the noble missions they accomplish on the security and military levels, and the experiences and achievements they have accumulated in the field of risk and crisis management. “This makes us aware of the correctness of the approach that we have adopted for the development of our Royal Armed Forces in terms of structure and organization, as well as our concern to provide a permanent support and accompaniment, with the same will and determination, so that you can reach a higher level of professionalism and be able to take up all the challenges, particularly in this delicate international situation, with its military, security and economic incidences.”

In this context, the Sovereign lauded the efficiency of the human element of the Royal Armed Forces, men and women, and its continuous evolution that reflects the quality of the military training, which “We are always working to upgrade and improve, both theoretically and practically, in order to guarantee you the acquisition, in a continuous and productive manner, of all the necessary knowledge and expertise that qualify you to carry out your multiple tasks under the best conditions.”

The Sovereign also announced the establishment of a supreme military commission in charge of examining the project of creating a statute for non-commissioned officers, which defines the legal and organizational framework, as well as the management of the career path, according to a modern and global vision for this category, considered as one of the pillars of the Royal Armed Forces.

King Mohammed VI stated further that “as an expression of the great concern we have for the families of the martyrs and the wards of the Nation, who have made enormous sacrifices in defense of the Homeland and its territorial integrity, we have given our orders to allow this category to benefit from housing in the cities of the Kingdom, free of charge and at no additional cost, in order to guarantee them and their families a decent standard of living.”

“In order to preserve the achievements of this national experience, it is necessary to continue to support it through the development of programs, the modernization of infrastructures, and the provision of material and human means for its success, so that our young people who responded, voluntarily and in great numbers to the call, can serve with loyalty and enthusiasm, their Homeland,” King Mohammed VI underlined in the Order of the Day.