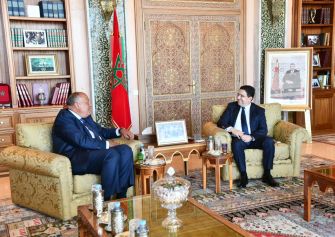 Egyptian Foreign Minister Sameh Shoukry hailed the role played by the Al-Quds Committee, chaired by King Mohammed VI of Morocco, in supporting the resistance of the inhabitants of the Holy City and preserving the Arab-Islamic character of Al-Quds, its legal and civilizational status and its historical identity as a land of coexistence between the three religions.

In a joint statement issued at the end of talks held this week in Rabat, between Shoukry and his Moroccan counterpart Nasser Bourita, the two parties reaffirmed the Arab and international constant values related to the establishment of an independent Palestinian State with East Al-Quds as its capital, within the borders of June 4, 1967 and living side by side with Israel, in accordance with the relevant international resolutions.

On this occasion, Bourita welcomed the concrete support provided by Egypt to the Palestinian people to achieve their legitimate rights, leading to the end of the occupation and the establishment of their independent state, said the joint statement, noting that the minister also highlighted the efforts made by Egypt for the stability and preservation of peace between the Palestinian and Israeli peoples in order to prevent any recurrence of the military escalation as experienced in the Palestinian territories in May 2021.

He also highlighted Egypt’s efforts for the reconstruction of the Gaza Strip, which is considered a priority for improving the living conditions of the Palestinian population, as well as for the reconciliation of Palestinian factions, the objective being to end the division to strengthen and support the Palestinian negotiating position and establish security and stability in the occupied Palestinian territories.

Bourita and his Egyptian counterpart stressed the need to overcome inter-Arab differences in order to preserve the unity of the Arab rank in the face of the unprecedented challenges facing the region, and stressed their rejection of all forms of foreign interference in the affairs of Arab States.

They also praised the efforts made by the two countries to assist the brotherly Arab countries that are going through difficult political and economic crises, with the aim of preserving the territorial integrity of these States, their national sovereignty and the cohesion of their societies.

According to the joint statement, the two ministers exchanged views on various issues of common interest at the Arab, continental and international levels, and reiterated the importance of active international cooperation to address all cross-border security threats, including terrorism, extremism and cybercrime, in addition to continuing coordination and cooperation within the Mediterranean region for sustainable development, security and stability, the fight against terrorism and a comprehensive treatment of the migration issue.

Regarding the latest developments in the Libyan crisis, the two ministers reiterated their respective countries’ support for the principle that inter-Libyan dialogue, without foreign interference, remains the only way to reach a solution and to hold simultaneous presidential and parliamentary elections in Libya.

In this sense, they welcomed the role played by the Libyan State institutions, especially the measures taken by the House of Representatives as the elected legislative body.

The Moroccan minister praised Egypt’s hosting of the Libyan constitutional committee process and its role in launching the work of this committee in coordination with the UN support mission in Libya.

For his part, the Egyptian minister welcomed the rounds of dialogue hosted by Morocco and which led to the Skhirat political agreement signed by the Libyan parties.

The two parties likewise stressed the need for all foreign forces, mercenaries and foreign fighters to leave Libya within a well-defined period, in accordance with the relevant Security Council resolutions and the recommendations of the Paris and Berlin processes.

They also insisted on supporting the efforts of the Libyan Joint Military Commission (5+5) in this regard, in addition to backing the attempts of comprehensive national reconciliation between the Libyan brothers, as well as the implementation of the economic reforms necessary to preserve the Libyan wealth and the capabilities of its people.

In addition, it was agreed to continue coordination and collaboration within the African Union to serve the interests of both countries and to contribute to the reform of the system of the Union to make it an organization reflecting the will of African countries and their ability to take control of their destiny and their choice to consolidate the foundations of peace and development in the continent, through an equitable representation of the northern region in the system of peace and security in Africa, especially in the African Peace and Security Council.

The joint statement said, on the other hand, that Shoukry informed his Moroccan counterpart of the latest developments relating to “the Renaissance” dam.

In this regard, Bourita reaffirmed Morocco’s full support for Egypt’s water security, as an integral part of Arab water security, while calling for the abandonment of unilateral policies in relation to international rivers and respect for commitments under international law, including the agreement on the declaration of principle signed in 2015, which prohibits any unilateral measures regarding the filling and operation of the Renaissance Dam, as well as the need for the parties to cooperate in good faith to reach, without delay, a binding legal agreement on the rules of filling and operation in line with the presidential statement of the Security Council, issued in September 2021.