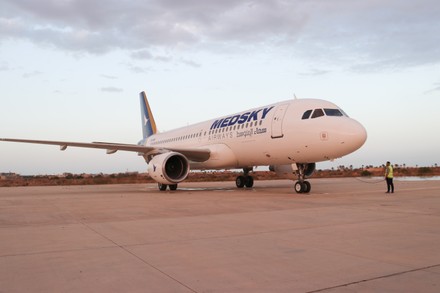 Med Sky is based in Malta and Misrata. A source who asked not to be named because not allowed to talk on the matter told the Libyan media that Malta’s ambassador to Libya, Charles Saliba, backs the venture and allegedly helped the company obtain the necessary licenses to work from Malta.

The airline is the first Libyan commercial airline to fly on European sky ever since the European Union halted direct flights with Libya in the aftermath of the second civil war outbreak in 2014.

Taher Issa is a business tycoon based in Misrata and known close to Dbeibeh, one of Libya’s current two Prime Ministers.

Libya’s parliament, the House of Representatives (HoR), replaced Dbeibeh in February by former Interior Minister Fathi Bashagha, arguing that his mandate came to an end on Dec. 24, the date of failed presidential elections.

Dbeibeh has refused to relinquish power and prevented Bashagha from entering Tripoli. The HoR-backed Premier has established his office in Sirte.

Issa has been reportedly at odds with Bashagha for years over several issues, even before the Libyan politician was named Minister of Interior in the previous administration known as Government of National Accord (GNA).

Libya currently has over 10 airlines including Libyan Wings, Afriqiyah Airways and Libyan Airlines, in operation.