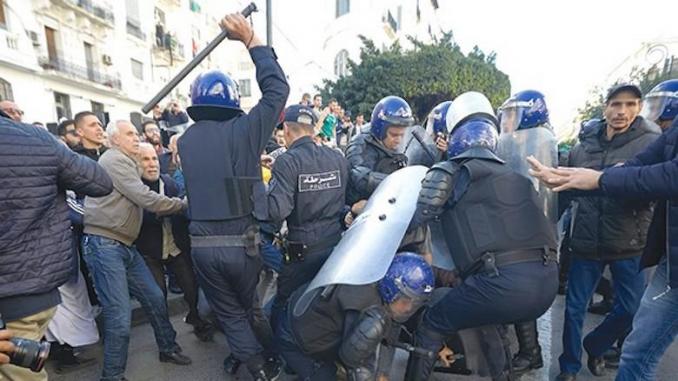 The military regime in Algeria is tightening the noose around human rights activists and civil society organizations (CSOs) curbing freedoms, arresting peaceful dissidents and issuing travel bans, as the economic and social outlook of the country darkens.

Between January and April 2022, the authorities have prevented at least three Algerian-Canadian citizens, only one of whom has been charged, from returning to their homes in Canada and interrogated them about their links to the Hirak, a mass protest movement calling for political change, Human Rights Watch and Amnesty International said.

“The travel bans are the latest tactic in a crackdown on Algerians suspected of criticizing the government or participating in protests,” Human Rights Watch said in a statement.

In a bid to thwart the resumption of the Hirak, Algeria sent to jail scores of human rights defenders, civil society activists, opposition figures, journalists…

They have been arbitrarily imprisoned for peacefully exercising their rights to speak and assemble and have been convicted on vague charges, according to Human Rights Watch.

According to the National Committee for the Liberation of Detainees (CNLD), created in August 2019 by activists and lawyers to monitor arrests and trials in Algeria, at least 280 people are currently imprisoned for peacefully expressing their opinions, most of them in relation to the Hirak.

The Front against Repression, an Algerian group bringing together dissidents and rights defenders, said in a recent statement that the crackdown on peaceful protesters and activists reached unprecedented levels sparing no region.

The military regime, ruling behind a civilian curtain, has installed a “climate of fear in the country”, the group said, demanding the release of all peaceful activists who are in jail for their opinions.

The atmosphere of fear has hit cultural activity with the ban of a conference by Bejai professors, three of whom have been sacked for their views.

North Africa Post's news desk is composed of journalists and editors, who are constantly working to provide new and accurate stories to NAP readers.
NEWER POSTActivities of Chair of African Literature & Arts launched at the Academy of the Kingdom of Morocco next week
OLDER POSTUkraine to top agenda of EBRD meeting in Marrakech