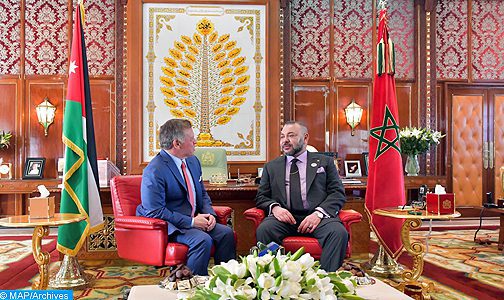 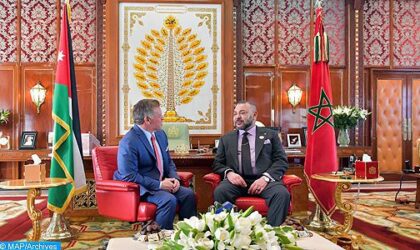 King Mohammed VI and King Abdullah II of Jordan discussed this Monday in a phone talk the situation in the city of Al Quds and the Al Aqsa Mosque following the incursions by Israeli forces in sacred shrines and attacks on worshippers.

The Royal Office said in a statement that King Mohammed VI, Chairman of the Al Quds Committee and King Abdullah, who serves as custodian of holy Islamic and Christian places in Jerusalem, discussed the developments and events in the city of Al Quds and the Al Aqsa Mosque following the incursions into sacred places and attacks on worshippers.

The two Sovereigns deemed that this escalation is likely to stir up feelings of resentment, hatred and extremism and to destroy the chances of relaunching the peace process in the region, the Royal Office said.

During the phone call, King Mohammed VI got informed on the health condition of the Jordanian Sovereign after the surgery he underwent recently.

King Mohammed VI had sent a message of congratulations to King Abdullah II following the success of the surgery, wishing him a speedy recovery, and praying the Almighty to grant him good health and long life.

On Sunday, Morocco had strongly condemned the raid of Israeli occupation forces on Al Aqsa Mosque, the closing of its gates and the attack against unarmed worshipers in the mosque compound, leaving many injured.

“This blatant aggression and methodical provocation during the holy month of Ramadan against the sanctity of the mosque and its place in the heart of the Islamic Ummah will only fuel feelings of hatred and extremism and destroy the chances of reviving the peace process in the region,” said Moroccan Foreign ministry in a statement.

Morocco called on the United Nations and the international community to intervene urgently to put an end to these violations and assaults against the defenseless Palestinian people and its sacred values, said the statement, adding that upon the Sovereign’s instructions, Morocco’s condemnation and denunciation were communicated directly to the head of the Israeli liaison office in Rabat.
Jordan has also condemned the Israeli raids and called on Israel to respect the historical and legal situation in Al-Aqsa Mosque, and to stop its “illegal and provocative” measures.