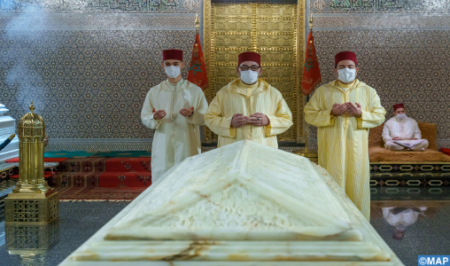 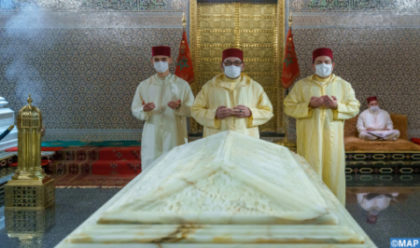 King Mohammed VI, Commander of the Faithful, commemorated Tuesday the 63rd anniversary of the passing away of his grandfather, the late King Mohammed V.

The Sovereign who was accompanied by Crown Prince Moulay El Hassan and Prince Moulay Rachid, visited the Mohammed V mausoleum and prayed at the grave of the late King Mohammed V.

The late King Mohammed V passed away on February 26, 1961, which coincided with the 10th day of Ramadan in the year 1380 according to the Islamic calendar.

King Mohammed V is remembered for his struggle to defend his country in the face of French and Spanish colonialism and his efforts to restore the kingdom’s peace and independence.

King Mohammed V, standing as a symbol of Moroccans’ nationalist resistance to colonialism, was perceived by French authorities as a threat to their colonial rule. This prompted France to exile the Moroccan monarch along with his family members to Corsica on the eve of Eid al-Adha in 1953, and then to Madagascar in 1954.

He is remembered as the Father of the Nation, the patriotic and committed King, the craftsman of independence and symbol of the struggle of peoples for freedom and emancipation.