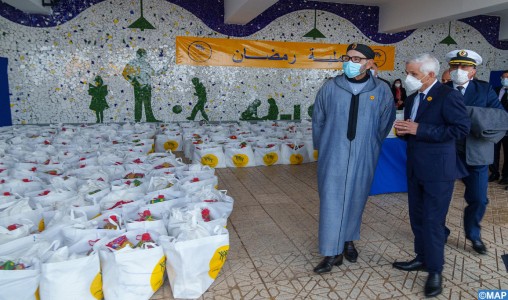 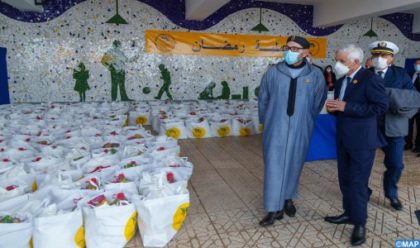 King Mohammed VI launched, on Tuesday in the old medina of Rabat, the “Ramadan 1443” national solidarity operation, sponsored by the Mohammed V Foundation for Solidarity, to support vulnerable populations through the holy month of Ramadan.

This significant action of generosity in this blessed month of Ramadan reflects the Sovereign’s constant solicitude towards the populations in vulnerable situation and enshrines the values of humanity, solidarity, mutual aid and sharing, all characteristic of the Moroccan society.

The Ramadan 1443 operation, worth 103 million dirhams, will benefit this year 600,000 households (nearly 3 million people) 77% of whom reside in rural areas.

This national operation of solidarity, which is in its 23rd edition, is financially supported by the Ministry of the Interior and the Ministry of Endowments and Islamic Affairs. It has become over time an annual event to provide assistance and comfort to the most vulnerable social categories, including widows, the elderly and people with disabilities.

This year, and given the stability of the epidemiological situation (according to the latest data from the Ministry of Health and Social Protection), the food aid distribution system has been relocated to the distribution Centers managed by local authorities.

For the smooth running of this operation, thousands of people and several institutions, including the social services of the Royal Armed Forces, social workers and volunteers, are mobilized at more than 1,800 distribution points set up throughout the country.

The Ministry of Health and Social Protection and the National Office of Food Safety (ONSSA) are participating in the campaign to assess the quality of the food products distributed.

The operation “Ramadan 1443” is thus added to the various actions and humanitarian initiatives undertaken by King Mohammed VI in order to promote the culture of solidarity and to ensure a sustainable human development.

The first Ramadan food distribution operation was launched in 1998.