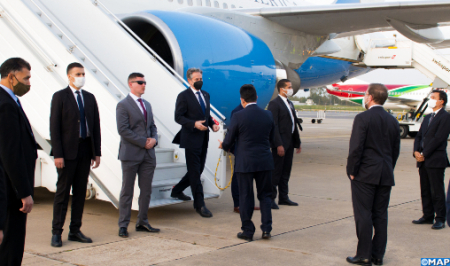 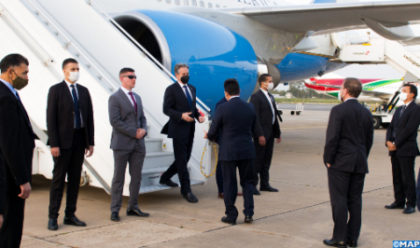 US Secretary of State Antony Blinken arrived in Morocco on Monday for a working visit.

During the visit, to last until March 30, Blinken will meet with several senior Moroccan officials, including the Head of Government Aziz Akhannouch, and Foreign Minister Nasser Bourita to discuss means to further boost bilateral relations at all levels and exchange views on regional political issues.

The Secretary will also engage with Moroccan civil society leaders and participate in a media engagement, the US State Department said in a statement released few hours before Blinken’s arrival in Rabat.

The strategic bilateral partnership between the United States and Morocco is rooted in shared interests in regional peace, security, and prosperity, the statement said, welcoming Morocco’s role in promoting regional stability, prosperity, and the historic normalization of relations with Israel.

“The United States recognizes the role played by Morocco in maintaining regional security and stability as well as its contribution to peace and prosperity in the Middle East,” the State Department pointed out.

It also underlined the two countries’ commitment to continuing cooperation on issues of common interest, such as regional peace and prosperity and regional security. “The United States and Morocco expressed their intent during the strategic dialogue to continue strong counterterrorism cooperation, including against AQIM and ISIS. We appreciate Morocco as a stable security-exporting partner, for its leadership of the Global Counterterrorism Forum and for its sustaining role in the Global Coalition to Defeat ISIS, including by co-chairing the Africa Focus Group of the Coalition and hosting the upcoming Ministerial Meeting of the Coalition in May,” the statement added.

AS to bilateral relationship, it includes close collaboration on a range of issues, including the Sahel, Libya, and Ukraine. “We reaffirm the importance of respecting the territorial integrity, sovereignty, and national unity of all the Member States of the United Nations.”

Regarding Morocco’s efforts to support the UN political process in Libya, the statement said the United States welcomes these efforts to support the UN’s work and hosting the intra-Libyan dialogue. “We are united in our strong commitment to the sovereignty, independence, territorial integrity, and national unity of Libya and the priority for organizing national elections in the near term.”

The State Department also reiterated that “the United States continues to view Morocco’s Autonomy Plan as serious, credible, and realistic, and one potential approach to meet the aspirations of the people of Western Sahara.”

“The United States supports United Nations Secretary General’s Personal Envoy Staffan de Mistura in leading the political process for Western Sahara, under the auspices of the United Nations,” it added.

The statement also ranged over economic and military cooperation between the two countries, mentioning the $460 million compact administered by the US Millennium Challenge Corporation destined to expand education and employment opportunities for young people across the Kingdom, as well as land productivity and land rights for women in rural areas.

It also mentioned the African Lion, the largest military exercise in Africa and a critical component for the U.S.-Morocco security partnership, recalling that the 2021 exercise, which took place in June across the Kingdom, was the largest since the annual training event started in 2004.