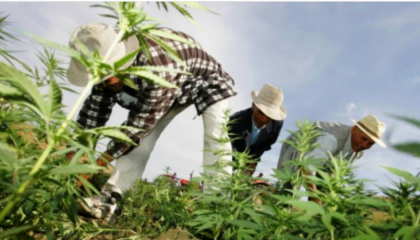 A new step forward in the legalization of cannabis cultivation in Morocco was made Thursday as the government adopted at its weekly meeting a decree regulating the activities related to the culture of the plant and selected three provinces, namely Al Hoceima, Chefchaouen and Taounate that will grow cannabis legally.

This decree, drafted by the Ministry of the Interior in coordination with the ministerial departments concerned, is part of the completion of the application of the law that was adopted in May 2021.

Ultimately, the text will subject all activities related to the cultivation, production, processing, transport, marketing, export and import of cannabis and its by-products to a licensing system.

It also provides for the creation of an advisory committee that will study and give its ruling on authorization applications. The Committee will be chaired by the Director General of the National Agency for the Regulation of Cannabis-related Activities or his representative, and composed of representatives of the sectors concerned.

Prior to tabling the bill on “the legal uses of cannabis, medical, cosmetic and industrial” to Parliament, the interior ministry had conducted exhaustive scientific studies, focusing mainly on the feasibility of the project, its socio-economic and environmental potential, as well as on the strengths and challenges that Morocco must meet to succeed in this large-scale project.

The studies showed that Morocco has great potentialities which are able to attract important investments for the industrialization of cannabis and the access to the global markets of these products.

The decree which identifies the three provinces (Al Hoceima, Chefchaouen and Taounate) allowed to cultivate and produce cannabis, leaves the door open to include other regions in the process based on domestic and international investors’ demand for cannabis supply chain activities.

According to the cannabis legalization law, the aim is “to convert illicit crops that destroy the environment into sustainable legal activities that generate value, money and employment.”

Under the law, the National Agency for the Regulation of Cannabis-related Activities shall buy the plant from farmers and sell it to pharmaceutical firms. The agency is also urged to adopt a gender approach to improve the conditions of rural women in these regions.

The text limits the plantation of cannabis to some regions only in northern Morocco and bans using the substance for recreational purposes.

The kingdom is counting on the “sustained development” of the global medical cannabis market, with forecasts of average annual growth of around 60% in Europe, its “target market”. Annual farm receipts are estimated to range from $420 million to up to $630 million by 2028.

Until now, small farmers in the North received “4% of final turnover in the illegal circuit” against potentially “12% in the legal market.”

The legalization of therapeutic use aims to improve the living conditions of the plant growers and protect them from drug trafficking networks.

The law also recommends, in a bid to support the efforts of negotiation between farmers and manufacturers, that farmers set up cooperatives which will be in charge of signing contracts with manufacturers and ensuring the preservation of farmers’ rights, in addition to allowing the farmers to acquire the best methods for sustainable agriculture and to be open to global experiences in this field, in addition to the acquisition of quality seeds.

Interior Minister Abdelouafi Laftit had explained during the parliament’s debate of the text that it is in line with the changes incurred by the global drug control system and in a special context marked by an “unprecedented” enthusiasm in countries around the world to develop cannabis cultivation and profit from the income generated by the commercialization of its legal products.

He had also highlighted Morocco’s competitive assets, namely the great knowledge of this plant gained over the centuries, which qualifies Moroccan farmers to guarantee the success of this project. The geographical position of the Kingdom as a gateway to Europe will undoubtedly facilitate access to the largest market for cannabis products.

The Kingdom’s logistics and its attractiveness of investment in general and foreign investment in particular are also part of these assets.