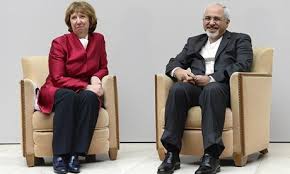 Iran has claimed that positive results have been gained from their discussions with the EU’s diplomatic Chief Catherine Ashton. Iran’s nuclear program has always been suspicious under the eyes of some regional countries and the West.  Foreign Minister Mohammad Javad Zarif said Tehran is “determined to find a solution that respects the rights of the Iranian people and also clear up any misunderstandings about the sites of the Iranian nuclear program” after meeting with the EU diplomat and ahead of next month’s meeting with the permanent members of the UN Security Council plus Germany.
Minster Zarif claimed that “progress” has been made after a “lengthy discussion” with Catherine Ashton and believes that “time” and “political will” are only what are needed to seal an agreement. Countries against Iran’s nuclear program fear that it will be used for military purposes. Tehran strongly denies it but has found it difficult to convince its doubters.
The next round of talks on resolving Western concerns will take place in Vienna on June 16-20. Discussion between the parties has of late been positive but sanctions still remain in place to put pressure on the government.
Zarif said that they have the political will to reach an agreement but didn’t elaborate any further. If Iran attains nuclear power, there are fears that it could lead to a nuclear race in the Middle East. There were hopes that the arrival of a new president last year would have eased the negotiations with Iran but little has been done to stop the program.
Israel feels unsecure with the program after several threats from former president Ahmadinejad of wiping it off the map. Tel Aviv hasn’t ruled out a military action to interrupt the nuclear program.