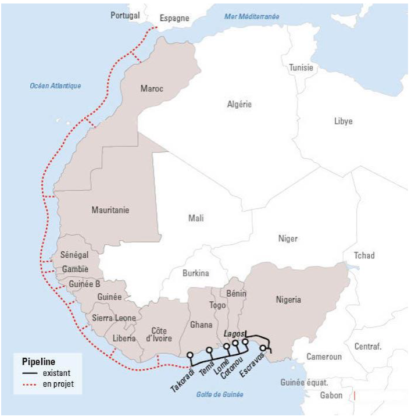 The outbreak of war in Ukraine has put Europe’s energy security under a new test as Germany halted the Nord Stream 2 Baltic Sea gas pipeline project with Russia, leaving few long-term gas supply options, chief among which is the Moroccan-Nigerian pipeline project.

The $11 bln Nord Stream 2 pipeline was intended to double gas flow to Germany from Russia by eschewing the Ukrainian routes.

After the German decision, former Russian president Medvedev tweeted “welcome to the brave new world where Europeans are very soon going to pay 2,000 euros for 1,000 cubic meters of natural gas!”

Although European officials reassure that the EU consumes 38% of Russian gas and that reserves were 30% full, the war in Ukraine cast a shadow over Europe’s energy security at a context where gas is key to the low-carbon goals of European economies.

Other main gas suppliers such as Qatar and Algeria said they do not have capacity to replace Russian gas in the short-term, leaving Europe vulnerable to Russian gas.

Given the risk of Russian manipulations, fewer options remain to secure European gas supply, namely a Qatari gas pipeline to Europe; the US as an alternative to Russian gas; and the Nigerian gas pipeline to Europe. When considering each of these alternatives it is necessary to take into account the geographical factor, the cost, guarantees of continuity of flow, in addition to the factor of political stability in countries of origin and transit countries.

The Moroccan-Nigerian gas pipeline remains the most realistic and economically steady.

Algeria has for decades failed to build a similar pipeline to channel Nigerian gas to the Mediterranean for security and also as a tactic to prevent competitive Nigerian gas from undermining its own and Moscow’s market share.

The off-shore onshore course proposed for the Nigerian-Moroccan pipeline is also conducive to enabling not only Nigerian gas to reach Europe, but also Mauritania and Senegal.

Therefore, the US and Europe should put their weight on supporting this project and ensuring that Russia does not use its ally Algeria to foil it.

The Economic Community of West African States (ECOWAS) had endorsed the Moroccan-Nigerian gas pipeline that will benefit regional integration and strengthen energy security of West African states, instead of the Algerian proposal of a tans-Saharan pipeline.