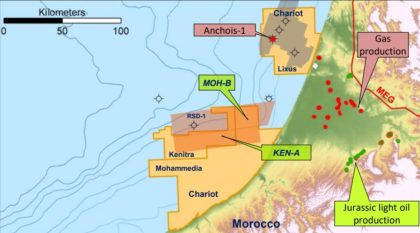 Chariot energy company announced this Monday a major gas discovery offshore northern Moroccan city of Larache, following appraisal and exploration drillings carried out at the Anchois-2 well within the Lixus licence.
Chariot has a 75% interest and operatorship of Lixus in partnership with the Office National des Hydrocarbures et des Mines (“ONHYM”) which holds a 25% interest.
Anchois-2 well was drilled to a depth of 2,512 metres and encountered significant gas accumulations with the appraisal target, Sand B, marking some 50 metres of net pay across two stacked reservoirs – the uppermost was the reservoir seen in the original discovery well, said the UK-based company.
The well also saw exploration success with three targets: Sands C, M and O, representing 250 metres of gross pay, “exceeding expectations”. All reservoirs were described as high quality.
“I am delighted to announce that Chariot, as well as conducting a successful appraisal well operation, has made a significant gas discovery at the Anchois-2 well which materially exceeds our expectations,” said Adonis Pouroulis, acting chief executive of Chariot.
“We continue to conduct further analysis on the data collected from the well, but as it stands, we believe the result is transformational for the company”, he added.
This new gas discovery will strengthen Morocco’s energy mix and sovereignty.