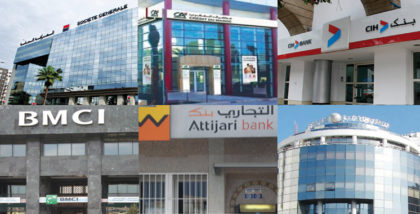 Moroccan banks have shown resilience to the impact of the Covid-19 crisis maintaining enough provisions to face the surge of the cost of risk due to a rise in impaired loans, analysts and the central bank say.

The IMF has urged the Central Bank to keep ensuring that the Banks had enough provisions to deal with non-performing loans and set up mechanisms to deal with bad loans.

But in his most recent press conference following its quarterly meeting, Central Bank governor said that Banks had a collateral of up to 400 billion dollars to deal with impaired loans and the cost of risk.

Non-performing loans spiked by 24% from end of 2019 to last September to hit some 8 billion dollars against the backdrop of the impact of the pandemic on business in Morocco and Africa where most Moroccan big lenders have branches.

Yet, for Morocco’s second biggest bank, BCP, the cost of risk has dropped by 20% thanks to a recovery of economic activity in Morocco and in African branches.

The Bank like its Moroccan peers rolled out investments in Africa and seized the opportunity of the withdrawal of French Banks to reinforce their footprints across the continent.

The presence of Moroccan banks in Africa has not only fostered Morocco’s economic clout, but helped these banks align on Morocco’s African foreign policy underpinned by co-development and win-win partnerships.

The BCP managing director has even hinted that the bank is in a good position to relaunch its expansion plans in Africa through new acquisitions and partnerships.