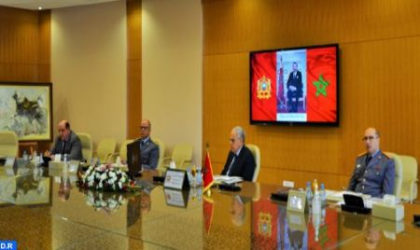 Abdeltif Loudyi, Minister Delegate, in charge of the National Defense Administration, took part, pursuant to the high royal instructions, in the 17th meeting of the Ministers of Defense of the “5+5 Defense” Initiative, which is held this year under the Mauritanian Presidency.

This meeting, held Thursday by videoconference, was an opportunity to review the cooperation activities carried out in 2021 and to agree on a plan of action for the year 2022, said a statement by the National Defense Administration.

The meeting approved a joint statement that provides, inter- alia, that the presidency of the Initiative for the year 2022 will be entrusted to Morocco, which will chair the 18th ministerial meeting of the initiative.

Loudyi welcomed, in his address, the efforts made by members of the Initiative to create and consolidate the conditions and environment necessary for the development of regular and pragmatic cooperation mechanisms in many areas of common interest, including maritime surveillance, aviation security, risk management, and training and academic research.

He also commended the resilience of the Initiative’s member countries in the face of the challenges posed to the international community by the Covid-19 pandemic, and praised the effective participation of the military health services, through their contributions in terms of health and logistical assistance, and support to the civilian authorities in charge of fighting the spread of this pandemic.

Loudyi took the opportunity to highlight the role of Morocco as an important actor of stability and peace, especially in the Western Mediterranean region and the stewardship of the King for the deployment of a multidimensional strategy to counter the threats of terrorism and illicit trafficking and for securing the borders.

During this meeting, Loudyi congratulated the Libyan Authorities for the progress made in terms of stability and security which will contribute to the building of national unity and stability of this brotherly country.

The aim was to promote cooperation between the countries bordering the western Mediterranean, including France, Italy, Portugal and Spain, later joined by Malta (the Northern bank) and Algeria, Libya, Mauritania, Morocco and Tunisia from the Southern bank.

The 5 +5 Defense Initiative aims to encourage mutual understanding among the member countries, to enhance trust, and to develop a multilateral cooperation, in order to promote security in the Western Mediterranean.

Through concrete actions of cooperation, the 5 +5 Defense Initiative seeks to help the creation and maintenance of a climate of trust and a frank collaboration between the ten countries with the objective of significantly contributing to the solutions that address common concerns in the security and defense field.