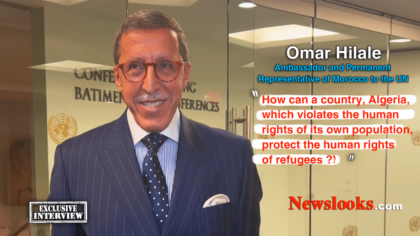 Algeria’s hostility and mounting escalation against Morocco is an attempt to “evade and conceal” a “critical” socio-economic situation on its territory, said Permanent Representative of Morocco to the UN, Omar Hilale.

“Algeria, instead of addressing its own mistakes, vehemently tries to blame Morocco for all its troubles, even if fortunately the Algerian people does not follow this daily smear campaign,” stressed the ambassador in an interview with the US magazine “Newslooks”.

“Despite all the spurious accusations and escalation of Algiers, Morocco has opted for a responsible and considered attitude, because it is not a warmonger country,” pointed out Hilale, in the interview conducted by Rachel Alexander.

He recalled that King Mohammed VI, in the speech marking the 22nd anniversary of his accession to the throne, has reached out to Algeria inviting it to “work together, without conditions, for the development of bilateral relations based on trust, dialogue and neighborliness.”

“Unfortunately, this Royal gesture remained without answer,” the ambassador lamented.

Asked if Algeria’s escalation conceals its intentions to start a war in the region, Hilale replied: “I sincerely hope that this will never happen”.

In addition, the diplomat noted that Algeria’s “primary” responsibility for the creation and maintenance of the Sahara conflict is “internationally known.” This responsibility has even been enshrined in successive Security Council resolutions that repeatedly mentioned Algeria regarding the resumption of the political process, along with Morocco, Mauritania and the polisario.

Responding to a question about a possible resumption of dialogue in light of the Algerian position, the Moroccan diplomat explained that the refusal of this country to resume the process of roundtable meetings, is a “headlong rush” that Member States “do not understand, neither here in New York, nor in the capitals” of the world.

“It even goes so far as to ask how can the only country that arms, finances and leads the diplomatic campaign of a separatist armed group shirk its obligations when it comes to the roundtable process in order to reach a mutually acceptable political solution,” noted the diplomat, adding that if Algeria “decides not to participate in this process, it would have to assume its responsibility vis-à-vis the Security Council, the UN Secretary General and his Personal Envoy and the International Community as a whole”.

For its part, Morocco is convinced that there is no alternative to resolving this problem without the “effective and responsible” participation of Algeria, stressed Hilale, noting that the kingdom, which has expressed through the highest authority of the country its support to the UN Secretary General and his Personal Envoy Staffan de Mistura, remains committed to the political process.

“It is the only way to the resumption of the Maghreb region integration and to bring peace, unity and prosperity to the region as wished by H.M. the King” in His speech on the occasion of the 46th anniversary of the Green March, the ambassador pointed out.

In this interview, the diplomat also ranged over the situation in the Tindouf camps that he described as the most guarded and militarized camps in the world. “No one can access or leave them without the permission of Algeria and its armed militia, the Polisario,” he said, deploring that the international Community, particularly, the United Nations human rights mechanisms, cannot access the camps, because Algeria categorically refuses to allow visits of the OHCHR, nor the special rapporteurs on human rights to the camps or to Algeria in general.

This obstructionist stance by Algeria has only one explanation: it is meant to hide the egregious violations of human rights and humanitarian law and to keep the Tindouf camps as a symbol of the problem of the Sahara, he explained.