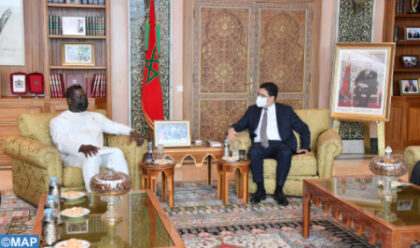 The Foreign Minister of Sierra Leone David Francis has commended the role played by Morocco in support of the Mano River Union.

At a news conference in Rabat following talks with his Moroccan peer, Nasser Bourita, the Sierra Leonian official highlighted Morocco’s continuous support to the Mano River Union, stressing that King Mohammed VI personally plays a “very important” role in the functioning of this bloc.

“HM the King has played a leading and pivotal role to promote integration in this region,” said David Francis.

The Sovereign had actually played a key role in easing tensions between the states of the Union, namely Côte d’Ivoire, Guinea, Liberia, and Sierra Leone.

The union aims to achieve greater unity and solidarity and to enhance cooperation between its member states and peaceful coexistence among its peoples.

The Sierra Leonean official also expressed satisfaction with the quality of bilateral relations, welcoming the opening of a consulate of his country in Dakhla, with the view “of supporting the common interests of the two countries in this region.”
The Consulate in Dakhla has already started its work with the appointment of a Consul General, which is an illustration of Sierra Leone’s unwavering position in support of the territorial integrity of Morocco and its sovereignty over its southern provinces.

He also praised Morocco’s support to Sierra Leone in capacity building through, among other actions, the granting of scholarships to Sierra Leonean students.

The minister underlined the need to speed up the operationalization of the joint commission, as it constitutes an important mechanism for identifying the key elements of strengthening cooperation between Rabat and Freetown.

The Sierra Leonean top diplomat also welcomed the support of Morocco, a “global player”, for his country’s candidacy to join the UN Security Council as a non-permanent member in 2023.

Bourita on his part described his talks with his Sierra Leonian peer as “very positive”, underlining the remarkable dynamic witnessed by relations between the two countries.

He recalled that the two countries agreed last August, during a previous visit by FM David Francis, to convene the High Joint Commission during the first quarter of 2022 in Freetown, and to hold concomitantly a Business Forum.

He also recalled the signing, during the same visit, of a bilateral cooperation roadmap for the next two years. The two countries have started to implement this roadmap in the areas of training, sectoral collaboration and coordinating positions on several issues, he said.