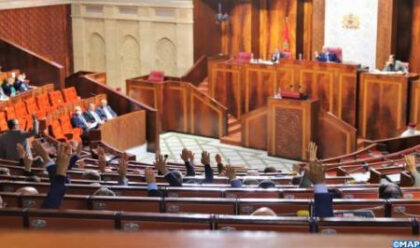 The House of Representatives adopted, Saturday evening in a plenary session, by a majority the entire Appropriation Bill (PLF) for the year 2022.

The PLF-2022, which is based on three priorities namely, employment, health and education, was approval by 206 MPs and opposed by 67, without any abstention.

The text was approved at the level of the Committee on Finance and Economic Development on Nov.09, after the adoption of a series of amendments.

This PLF 2022, expected to fulfil the desire for change and the entry of Morocco into a new phase which must be marked by the application of the new development model, has been met by several criticisms.

For many commentators, this is a timid budget on the fiscal side, where the state effort is funded mainly by a sharp increase in tax revenue from businesses. Consumption is also affected since the two domestic consumption taxes proposed risk to deal a blow to the purchasing power.

At the beginning of the plenary session Saturday, Minister of Economy and Finance, Nadia Fettah Alaoui, responding to the remarks of the parliamentary groups, defended the text as being “realistic” and described the bill as a bill of “hope”, of “confidence”.

She explained that this “budget comes in the context of a health crisis that put the government face to “a difficult equation.”

“On the one hand, we had to look for additional resources to cover irreducible ordinary expenses (payroll, compensation, operating expenses, etc.) in order to come out with a positive ordinary balance for the first time in two years”, she explained.

“We had to respect the commitments made in the government program by increasing investment spending by 9 billion DH. On the other hand, we needed to reduce the budget deficit from 6.7% to 5.9% of GDP,” she added.

She noted that the government “has succeeded, in a short time, in resolving this equation by presenting a finance bill which respects government commitments and guarantees the sustainability of public finances.”

Responding to criticism of the issues of taxes and purchasing power, Nadia Fettah took issue with the charges. “The increase in tax revenue is expected, not through an increase in the tax burden, but through the strengthening of control and improvement of collection,” she argued.

“The social solidarity contribution is introduced without affecting the income of the middle class. We have increased investment spending without increasing operating expenses so that this effort is geared towards economic recovery,” she went on to say.

Fettah Alaoui insisted that the PLF-2022 is based on three priorities namely, employment, health and education, with about 9 billion dirhams of additional funds, adding that the government has placed the social sectors and the preservation of the purchasing power of citizens at the top of the guidelines of this bill.

The official stressed further that the government also attaches great importance to the support of the regions to accelerate the implementation of regional development plans (RDP), especially projects and priority programs that will be funded under contract-programs between the state and the regions.

When unveiling the headlines of its budget draft bill in October, the Government said it forecasts a budget deficit of 5.9% of GDP and a growth rate of 3.2%.

The Government had then reiterated its commitment to foster the social role of the state and press ahead with education and health reforms while promoting job creation and entrepreneurship, announcing that Morocco will increase public investments to 245 billion dirhams in 2022, and will implement a social security plan through generalizing mandatory health insurance and pensions as well as stipends to the elderly and people with special needs.

The draft budget was prepared at a context marked by the start of the recovery of the Moroccan economy and the implementation of the new development model.

The central bank had said that the Moroccan economy will bounce back to 6.2% in 2021 after a contraction of 6.3% under the combined impact of Covid-19 and drought.