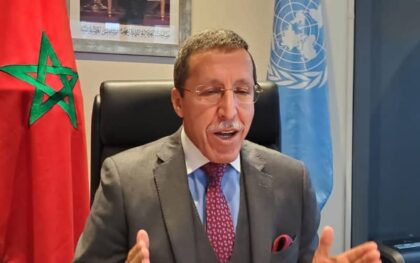 Morocco’s Permanent Representative to the UN, Omar Hilale, underlined before the 4th Committee of the UN General Assembly that Algeria’s role in the Sahara conflict is “irrefutable”, saying that “Algeria’s primary responsibility in creating and maintaining the regional dispute over the Moroccan Sahara is proven at all political, diplomatic, military, legal and humanitarian levels. Whether Algeria likes it or not, the flagrancy of its acts and decisions is irrefutable.”

Mr. Hilale recalled that Algeria, following the signing of the Madrid Agreement, has officially claimed the status of a concerned party that is interested in the Sahara. This came in a letter sent to the Council by Algeria’s Permanent Representative, who stated that the “concerned and interested parties in the Western Sahara issue are Algeria, Morocco and Mauritania.”

This is a “historic” claim, as it “consecrates Algeria as a concerned party even ahead of Morocco, while totally disregarding the “polisario”, which was freshly created by Algeria and its ally, the former dictator Moammar Kaddafi,” the Moroccan ambassador explained, recalling that Algeria participated directly in the battles of Amghala 1 and 2 in the 1970s, where dozens of Algerian soldiers had been taken prisoner by the Royal Armed Forces.

In addition, the Moroccan diplomat pointed out that Algeria, according to its own newspapers, has spent, in 46 years, over $375 billion in its war of attrition against Morocco, including by funding, training and entirely arming the “polisario”, at the expense of the socio-economic development of the country. Algeria “dedicates its diplomatic apparatus to the service of a single agenda, that of the Moroccan Sahara,” the Moroccan diplomat insisted.

“Algeria refused the Framework Agreement prepared by James Baker in 2001. It proposed the partition of the Moroccan Sahara in 2002. It took part in the Manhasset meetings from 2009 to 2012. Its two foreign ministers participated in round-table discussions in Geneva in 2018 and 2019,” said the ambassador.

Besides, the Security Council considers Algeria as a party to the conflict. That is why it has been calling it in its latest resolutions, including in its latest Resolution 2602, on Algeria to participate in the round-table meetings, mentioning Algeria five times, as many times as Morocco.

Mr. Hilale also pointed out that Algeria “which claims to be concerned about its sovereignty, which is quite legitimate, contradicts this profession of faith by ceding part of its territory and, therefore, its sovereignty to a separatist armed group, the ‘Polisario’, in the camps of Tindouf.”

“Morocco has always reached out to Algeria to serve the interests of the two brotherly peoples and the Arab Maghreb region. In turn, Algeria persists in its relentlessness against the territorial integrity of the Kingdom and seeks to harm it by all means,” he lamented.

“Whatever Algeria may think, Morocco, with its multi-millennial history, will continue the march of development and emancipation of its People from Tangier to Lagouira,” he said. “We will never stop repeating: Morocco is in its Sahara and the Sahara is in its Morocco.”

Omar Hilale also stressed before the 4th Committee that Algeria’s discourse “clings to the past” while the UN Security Council looks to the future, working for a political solution to the regional dispute over the Sahara.

The Moroccan diplomat noted that Algeria “has serenaded the Committee with its endless selective reading of the Declaration 1514 in a vain attempt to mislead the members of the 4th Committee.” Declaration 1514, which is a soft law or declaratory resolution, is not limited only to enacting the principle of self-determination, he explained.

“On the contrary, its authors have included legal barriers to this principle, by codifying in its paragraph 6, the imperative of respect and preservation of national unity and territorial integrity of nations. Which are rights and principles already enshrined for centuries, both in treaties between States, as in multilateral agreements, including the Charter of the United Nations,” said the Moroccan diplomat.

In this regard, he pointed out that the implementation of any legal principle, whether domestic or international, requires the adoption of implementing provisions, noting that this is the case of 1514, whose implementation modalities were codified in resolution 1541, twenty-four hours after its adoption by the General Assembly.

“Moreover, these implementing provisions were supplemented and updated, 10 years later, by Declaration 2625, which also emphasized respect for territorial integrity and the obligation of States to refrain from the threat or use of force against the territorial integrity of other States,” added the ambassador.

He further recalled that this declaration reiterates the duty of each member State to “refrain from organizing or encouraging the organization of irregular forces or armed bands, including bands of mercenaries, with a view to incursions into the territory of another State.”

“These are so many provisions of international law that the member States of the United Nations, in their great wisdom, were keen to put in place to protect States against any piecemeal interpretation or abuse of the 1514 text,” the ambassador stressed.