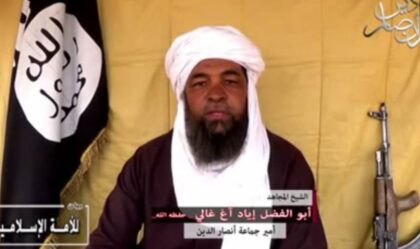 The deputy director general of the Algerian intelligence services met Wednesday evening in northern Mali with Iyad Ag Ghali, the leader of the terrorist GSIM group (Support Group for Islam and Muslims), the local branch of Al Qaeda.

The official of the Algerian intelligence services reportedly flew Wednesday evening by helicopter to a spot located some 21 km east of Tinzawaten, in northern Mali, some news outlets have reported.

The meeting with Iyad Ag Ghali was organized by emissaries of the Algerian secret services, dispatched last week to Tinzawaten, a Malian locality located on the border with Algeria.

During the 4-hour meeting, held at the request of the Algerians, discussions tackled several topics, with focus on the occupation of all of northern Mali by the GSIM.

The deputy director general of the Algerian intelligence services assured the terrorist leader that Algeria will put at his disposal all the financial means and military support he needs, according to the press reports.

The meeting between the Algerian senior spy and the terrorist Iyad Ag Ghali also discussed how to consolidate the GSIM’s control over the Coordination of Azawad movements (CMA), an alliance of rebel groups created in 2014 during the war in Mali.

The two men agreed that no solution or concession on Azawad should be made outside Algeria, without the approval of the Algerian intelligence services and government.

The deputy director general of the Algerian intelligence services also insisted on the fact that the Sahara must be under the authority and the control of the GSIM, reiterating Algeria’s total support to Iyad Ag Ghali, for his protection and that of his group and his men.

Iyad Ag Ghali, who founded the jihadist Ansare Dine group before taking the presidency of the GSIM, has benefited for a very long time from the protection of Algeria which offered him refuge at the end of the military operation of 2013 in Mali.

The undisputed leader of GSIM, Iyad Ag Ghali, is a Tuareg born in 1958 in Boghassa, Mali. The Tuaregs are claiming the independence of Azawad which they proclaimed in 2012 in this territory in northern Mali which covers Saharan and Sahelian areas.