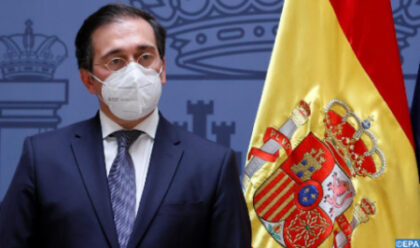 Spain is ready to start a new phase in its relationship with Morocco, based on “trust, transparency and respect for the commitments made”, said the Spanish Foreign Minister, José Manuel Albares, in an interview published Sunday by the Paris-based magazine Jeune Afrique.

“We are indeed seeing an improvement in the context and the signals we have received from Morocco over the past few months are positive. The public messages of King Mohammed VI are also very clear,” underlined the Spanish top diplomat.

“We are, for our part, ready to start a new phase in our relationship, based on trust, transparency and respect for the commitments made,” he pointed out.

“Now that communication is restored, the most important thing is to work to avoid the repetition of such situations”, he said, referring to the diplomatic crisis between the two countries.

“Our diplomatic relations remain intact; our ambassador is still in Rabat. The decision to get the Moroccan embassy in Madrid resume its normal course falls exclusively within the competence of Moroccan authorities,” he stressed.

In a speech last August, King Mohammed VI said the two countries are about to “usher in a new, unprecedented phase in the relations based on trust, transparency, mutual respect and the fulfilment of obligations”.