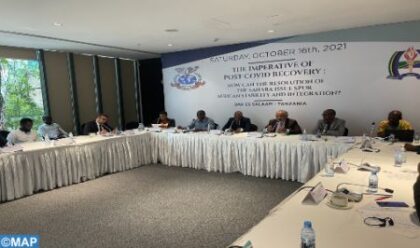 Algeria’s disillusioned diplomacy is still resorting to fake news to sell its claims. However, in the current connected world, the fake stories cooked by the polisario fraudsters their Algerian puppeteers are no longer working and nobody is still gullible enough to fall for their fake stories.

One of the latest hoaxes by the Algerian regime was quickly outed and exposed by President of the Tanzania Peace Foundation Sadiki Godigodi who flatly denied a statement bearing a forged signature that was relayed by the Algerian Press Agency, APS, mouthpiece of the Algerian authorities.

The TPF think tank issued a press release through the voice of its President in which it denied “the false and immoral” allegations of the document fabricated by the Algerian regime and disseminated by APS concerning the Dar Essalam press release on the exclusion of pseudo-rasd.

The President of the Tanzania Peace Foundation actually denies as “false and immoral” the information circulated by the Algerian regime and denounces the imitation of his signature as well as the fake seal on the forged document, allegedly issued by the Foundation at the end of a conference held on Saturday, October 16, 2021 in Dar Es-Salaam, co-organized by the Institute of Peace and Conflict Studies (IPCS).

The conference, held under the topic “The Imperative of Post-Covid Recovery: How Can the Resolution of the Sahara Issue spur African Stability and Integration?” in Dar Es-Salaam, on Oct.16, had called for the expulsion of the pseudo-SADR, self-proclaimed by the separatist polisario, from the African Union (AU).

The expulsion of “SADR, which has “no attributes of a sovereign state”, will correct a “burdensome historical error” that was inherited from the Organization of African Unity (OAU), and that discredits the AU in its Constitutive Act stipulating that the Union must only bring together sovereign states, said the participants in the Conference in a final statement.

The participants in the Conference were unanimous in stressing that the resolution of the Moroccan Sahara issue necessarily requires the expulsion of this puppet entity, a “source of division and instability” in Africa.

As expected, the wording of the conference’s final statement was not to the liking of Algerian authorities, which rushed to fabricate another statement in line with their theses and animosity towards Morocco.

The chairman of the Tanzania Peace Foundation denied the content of such a fake document, and assured in an official statement that the news circulated by some media outlets are false and that both the signature and the seal affixed to the document are forged.

The Tanzania Peace Foundation reaffirms strongly the positive and effective participation of its members in the conference, as well as its commitment to all the conclusions and recommendations formulated jointly during the conference co-organized by the Institute of Peace and Conflict Studies (IPCS).

The TPF also renews its engagement and commitment not only to the outcome of the conference but also to the content of the final statement issued on 16 October 202I by the two Tanzanian think-Thanks at the end of the conterence.

The Tanzania Peace Foundation strongly comfirms the authenticity of this present statement, declaring that any news issued, in the name of the TPF by any media outlet or social network, that are contrary the content of this present statement should be considered as a fake news and does not express the TPF’s orientations and the participants’ standpoints concerning the Sahara issue.