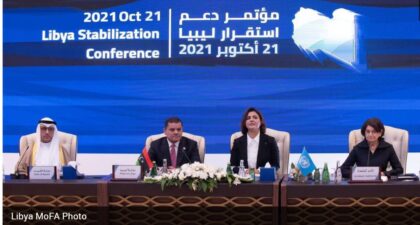 Participants at Libya’s stability Conference on Thursday re-iterated the need to hold December 24 elections amid fears that the process could be postponed.

The conference issued a final statement calling for confidence-building steps to enable fair, transparent and inclusive elections on Dec. 24, Libya’s top diplomat Najla El-Mangoush said, as the summit wounded up.

The meeting, Libya Herald reports, was expected by some to be a platform to be used to delay the elections to spring 2022. The conference also demanded an end to foreign interference into Libyan affairs in reference to the presence of foreign fighters on the Libyan soil.

The participants also backed the ongoing ceasefire implemented by the 5 + 5 Joint Military Committee.

The Moroccan delegation to the conference said that supporting the stability of Libya is in line with Morocco’s vision for the settlement of this crisis, insisting that any solution likely enable the country to go from the transition process to that of democratic building can only be a realistic inter-Libyan solution preserving the sovereignty of the country, far from any interference or foreign agendas.

Morocco’s vision has been clear since the first consultations leading to the Skhirate agreement and the Libyan Dialogue meetings that took place afterwards in the Kingdom, in Bouznika and Tangier, said head of the Moroccan delegation to the conference Fouad Yazough.

The Moroccan diplomat called for more efforts to address other challenges, preserve political and security gains and achieve the aspirations of the Libyan people for stability, national reconciliation and development.

The Kingdom, which ensures to coordinate with the United Nations in its actions of rapprochement between the Libyan stakeholders, reiterates its readiness to support the political process in Libya, the efforts of national reconciliation as well as the security, economic and political plans for the construction of a strong and unified Libyan state that strengthens national as well as regional security and stability, Fouad Yazough said.

The UN insists that the holding of timely, free, and fair elections is critical to break the cycle of perennial political transitions, to return to political legitimacy, and to put an end to foreign interference. The Libyan people want elections, and they want them now.