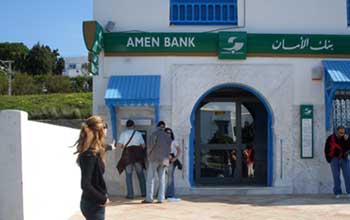 Tunisia Amen bank, the 2nd largest private bank in the North African country, has received backing from the International Finance Corporation, a member of the World Bank, to boost the company’s efforts to improve governance and modernize management practices.

The IFC backing comes at a time when Tunisian banks are implementing new central bank regulations on corporate governance. It is also part of the assistance provided by the IFC to Tunisia to enhance access to finance to help creating jobs and supporting the country’s battered economy by the Arab Spring uprising
The partnership will enable Amen Bank to expand lending to both retail customers and small and medium enterprises, helping Tunisian enterprises grow and create jobs.
“IFC’s wealth of experience will help us in our continued efforts to expand and support businesses across the country,” said Ahmed El Karm, CEO of Amen Bank.
“The financial sector is instrumental in private sector development,” said
Mouayed Makhlouf, IFC Director for the Middle East and North Africa. “By supporting lenders like Amen Bank, we can substantially upgrade the services to Tunisian businesses, helping promote economic growth.”
The Tunisian economy is currently in a bad shape, with GDP dropping 2.2 pc in 2011, the year of the revolution. In the first quarter of this year, growth was flat, meaning the economy still needs to come out of  recession. Worse still is the rising jobless rate standing at 20 pc. It was high unemployment among the youth that triggered the Tunisian popular uprising which led the fall of the regime of Ben Ali. Tourism, one of the pillars of the Tunisian economy, collapsed last year and has made only a tentative comeback, while budget deficit is expected to double this year to 6.7 pc. The situation was exacerbated by the sharp drop of foreign investment for fear that the new Islamist government would be unfriendly to business.

North Africa Post's news desk is composed of journalists and editors, who are constantly working to provide new and accurate stories to NAP readers.
NEWER POSTEU Sanctions in Syria: Slow Tools for an Urgent Objective
OLDER POSTMauritania Teams Up with United Nations to fight Money Laundering