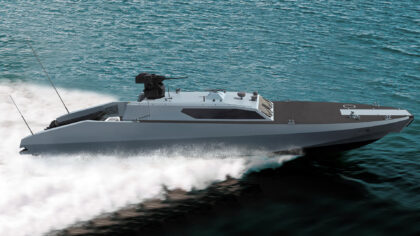 The Moroccan Royal Navy is in talks with Turkish shipbuilder Ares Shipyard to buy 15 vessels including 10 ARES 35 FPBs and 5 ARES 80 SATs to bolster the kingdom’s coast guard’s fight against illegal migration.

The talks, according to Tactical Report, are ongoing but the media did not reveal the value of the deal on the table.

ARES 35 FPB according to the Turkish ship builder is a well-proven platform with outstanding speed capability above 35 knots and seakeeping characteristics conform to tough environmental conditions. The vessel has an overall length of 11.90 m and can sail as fast as 35 Knots.

The ARES 80 SAT, on the other hand, is designed and engineered for Special Forces insertion and extraction, as well as fast attack, surveillance and patrolling missions.

“The craft is equipped with an auto-stabilized remote-controlled naval weapon system to provide versatile firepower that can be adapted to a wide variety of potential scenarios. The vessel has a suite of naval communications equipment, electro-optic (E/O) sensors and X-Band Naval Radar. It is equipped with a RHIB boat for multi mission capability such as boarding and interception,” the company said on its website.

24.10 m long, ARES 80 SAT can sail as fast as 45 Knots. The vessels according to the Moroccan army, as reported by Le360.ma news outlet, will enable the kingdom to bolster the surveillance of its coastal borders and hunt down illegal migration networks. Military and security partnership between the North African country and Turkey has been on the increase in recent years and months.