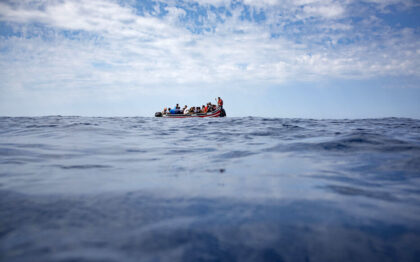 The wave of young Algerians trying to reach Spain’s shores has been surging over the past few weeks. On Monday, the Government Delegation of the autonomous community of Murcia confirmed that 103 would-be illegal immigrants from Algeria were intercepted over the last 24 hours on the coast of Murcia, in south-eastern Spain.

The 87 men, five women and 11 minors were aboard 10 inflatable boats that were intercepted off Monte de las Cenizas in Cartagena, Murcia’s Government Delegation said.

“All illegal migrants intercepted by the rescue services and the Civil Guard are of Algerian nationality,” said the government delegation in Murcia, noting that the illegal immigrants are in good condition and have been taken care of in accordance with the Covid-19 protocol.

According to press reports, over the past four days, at least 14 migrants have died and a further 47 have gone missing in four separate incidents in the Mediterranean Sea and the Atlantic Ocean. Moreover, 230 people were rescued off Spain’s Balearic Islands. The Mediterranean and Atlantic routes are two of the busiest — and deadliest — migration paths in the world.

The most recent of the four incidents took place in the Alboran Sea, the westernmost portion of the Mediterranean. Rescue workers on Sunday October 17 searched for 12 migrants who disappeared after their boat overturned while they were trying to reach the Spanish coast from Algeria, Spain’s coast guard said.

A rescue operation was launched after a Norwegian sailboat reported picking up an Algerian man in the sea around 13 kilometers off the southwestern Spanish province of Almeria, according to a coast guard spokeswoman.

A coast guard helicopter discovered another migrant floating in the water in the same area and rescued him, the spokeswoman added.

The two survivors told rescuers that they had set off with 12 others last week from a beach near Oran in northwestern Algeria, around 100 kilometers away from the Spanish city of Almeria. Early Sunday morning, however, their boat’s motor broke down and the vessel overturned.

According to figures from local Spanish authorities, more than 15,000 Algerians have embarked on the perilous journey to reach the Spanish coast since January this year. The same sources report at least 500 deaths, a figure that could increase in the coming months.

The Spanish Popular Party (PP) has sounded the alarm that the surge of illegal Algerian immigrants poses a security threat to Spain and to Europe.

PP MEP Rosa Estaras recently sent a letter to the European Commission calling to take into consideration the “risks posed to our security” by this increase in the number of Algerian illegal migrants flocking to the country.

The MEP also urged Brussels to follow up the increase in Algerian irregular immigration to Spain and analyze the causes of this phenomenon.